Earlier this week, longtime Major League manager John McNamara passed away. Although he managed for almost 20 years, he'll best be remembered for leading the Boston Red Sox to the 1986 World Series. In tribute, I present 3 favorite cards from my collection: 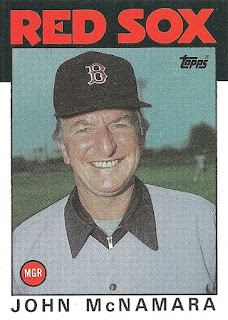 As I was looking at the cards I had of McNamara, one thing stood out to me. After 1986, it doesn't appear he smiles on his cards. He seems to have an annoyed, "WTF" look about him. I've read that he lost a lot of joy managing after all the backlash he got for leaving Bill Buckner in that fateful Game 6 of the World Series. I don't know if that's true, but his smile here reflects a man about to have a great year! 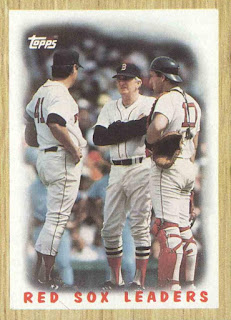 McNamara managed for at least a portion of 19 seasons, and in that time he managed some truly legendary players, like Tom Seaver here.
I want to take this opportunity to talk about another player he managed. Most of the articles I've read about McNamara's passing make sure to mention that part of his career legacy will always be tarnished by that decision to play Bill Buckner. There's another story not usually mentioned that should be a larger part of what he should be remembered for.
John McNamara was a minor league manager in the 60's for the team in the racially divided city of Birmingham. While there, he manage a young African American ballplayer named Reggie Jackson. McNamara's integrity never wavered. From the SABR Bio Project:

"When we'd be on a road trip and we'd stop at a diner for hamburgers or something to eat, McNamara wouldn't compromise. It was simple for him: if they wouldn't serve me they weren't going to serve anybody. He'd just take the whole team out of the restaurant, we'd get into the bus and we'd keep driving."  - Reggie Jackson 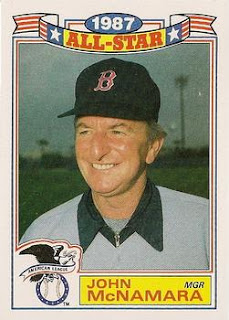 By virtue of his 1986 AL Pennant, McNamara got to manage one of the greatest All-Star games the following season. Pitching ruled the day as both teams put up zeroes for an amazing 12 innings. McNamara AL squad fell in the 13th, thanks to a 2-run triple by the game's MVP, Tim Raines. McNamara managed 9 eventual Hall of Famers in that game.
R.I.P. John McNamara
Posted by Matt at 10:00 AM