Baseball lost yet another Hall of Fame player when "The Chairman Of The Board" Whitey Ford passed away October 8th at the age of 91. Picking my Top 5 cards was easy in this case - I only have 5 Whitey Ford cards in my collection (not counting the latest addition to the Time Travel Trading  Project of course). Here are 5 cards I own, in chronological order: 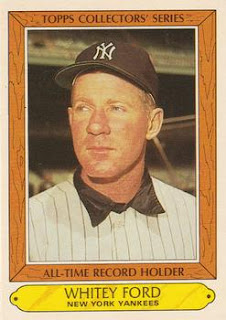 When people talk about baseball's unbreakable records, they usually talk about career achievements like Rose's hits or Henderson's steals. The all-time records listed on this card refer to Ford's World Series performances - 10 wins, 94 strikeouts, and an amazing 33 consecutive scoreless innings. With modern philosophies regarding bullpen usage, as well as expanded playoffs and a larger number of teams, Ford's records on the grandest stage are pretty safe from being challenged. 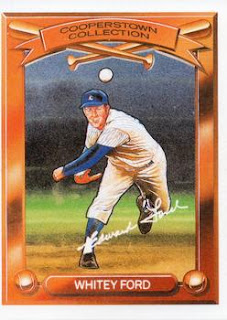 The two things that stand out most about this card are the beautiful artwork and the signature depicting his real name Edward. 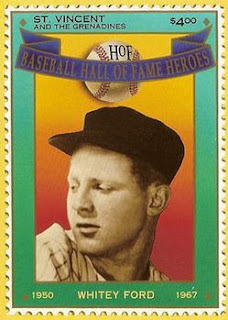 The latest addition to my collection came over the summer when I won this set as a prize from Chavez Ravining. Now that look at it, it seems they tried to give Whitey an old-timey hat for some reason. It looks off, especially without the logo. 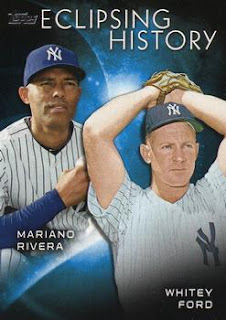 Coincidentally, like Gibson's 1971 card, I showed this card off a long time ago when this blog was in its infancy. The focus that day was on Rivera, but today we come full circle and honor Ford. 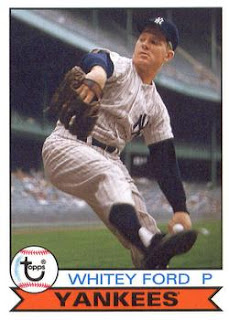 This is probably my favorite of all the Ford cards. The picture almost has a 3-D quality to it, like Whitey is just about to step out of the card's frame.
I'll end things with a personal Whitey story. I may have missed an opportunity to get his autograph. Ages ago, I went to a card show in Niagara Falls. The headline attraction was Mickey Mantle. Right before I needed to get in line to get his autograph, my dad directed my attention to another older gentleman standing around talking with some people. My dad was 90% sure it was Ford, but because my mind was on Mantle, and I wasn't as familiar with Ford, I never sought to find out for sure. I'll never know...
RIP Whitey Ford, you will be missed!
Posted by Matt at 10:00 AM