How that for a title?
Believe it or not, there's a connection there. I'll get to the baseball cards eventually, but first I present a brief history lesson:
Vincent of Saragossa was a 3rd century Spanish deacon. Back in those days Catholics were being persecuted by the Roman Empire, and Vincent found himself in jail at the hands of a Roman governor. He was basically given a choice: renounce his faith, or suffer horrible pain and torture. He basically told the Governor to piss off, and was subjected to an array of unspeakable pain:
From Wikipedia:

His outspoken manner so angered the governor that Vincent was inflicted every sort of torture on him. He was stretched on the rack and his flesh torn with iron hooks. Then his wounds were rubbed with salt and he was burned alive upon a red-hot gridiron. Finally, he was cast into prison and laid on a floor scattered with broken pottery, where he died. During his martyrdom he preserved such peace and tranquillity that it astonished his jailer, who repented from his sins and was converted. Vincent's dead body was thrown into the sea in a sack, but was later recovered by the Christians and his veneration immediately spread throughout the Church.

Ouch! He was eventually canonized by the Catholic Church, and became Saint Vincent of Saragossa, Patron Saint of wine makers (among other things).
It was on his feast day (January 22nd) that Christopher Columbus discovered an island in the Caribbean and named it after St. Vincent. That island is now part of the sovereign state known as St. Vincent and the Grenadines.
**********
Now for the baseball cards. Alex of Chavez Ravining recently held a contest, and gave away all sorts of great prizes. I was one of the lucky winners. My prize? 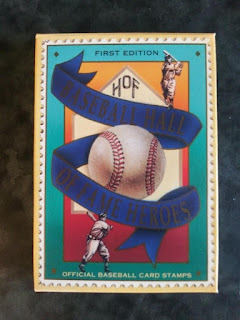 This is a 12 card set of stamps produced by the government of St. Vincent and the Grenadines in 1992. They are legal postage in that area too, which makes me wonder if anyone from there actually taped one to a box. 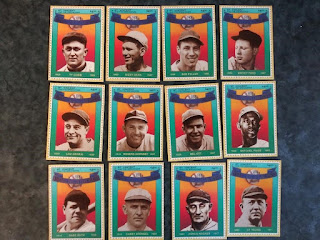 In addition to this set, Mark also included a bunch of Red Sox cards. 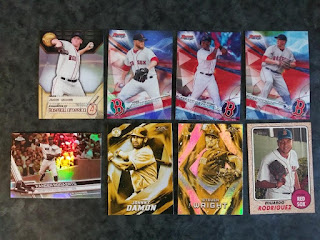 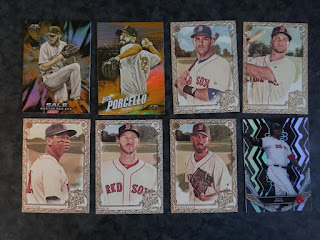 That's a lot of great cards, mostly from sets I don't spend a lot of money on.
Favorite Card: It's a tough call between the sepia Chrome Xander Bogaerts and the acetate David Ortiz. Since I gave Big Papi the nod a few weeks ago, I'll give the X-Man his due today.
Thanks for all the cards, Mark!
Posted by Matt at 10:00 AM