I don't really go for cards that are just rifts of the base set. I don't get overly excited by Opening Day or Chrome. I haven't bought a single bag of Utz potato chips. Making a small change to the base set and calling in a new set of its own just doesn't do it for me. The Topps Holiday sets fell into this category as well. Until this year at least. Topps made bolder changes that really give the cards a whimsical feel. As soon as I saw these cards on other blogs, I knew I would have to see for myself. 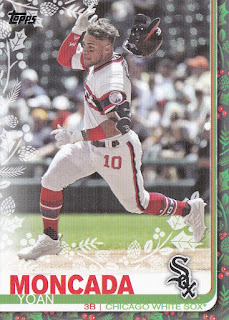 The honor of the first card goes to Former Red Sox prospect Yoan Moncada. As you can see, the holly border is a big eye-catching difference from the standard set look. The white snowy garland works much better when it's used as a compliment to the green and red Christmas motif. 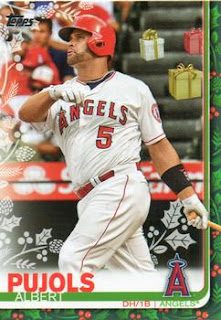 Topps has some fun with the Holiday set by giving us Christmas themed variations. Some variations are more obvious, like the presents on Albert's card. 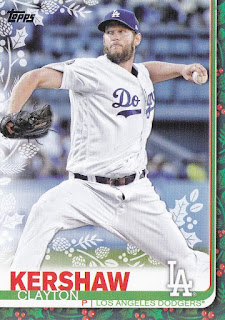 Poor Clayton must be on the naughty list this year. He's still getting cards of him with his zipper down, even after it's been fixed in other sets! 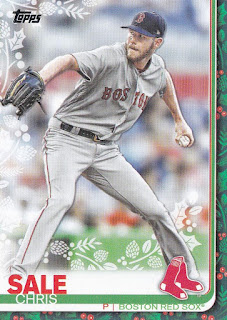 The first Red Sox card is ironically the guy the Red Sox traded Yoan Moncada for! I don't think either team will regret that trade! 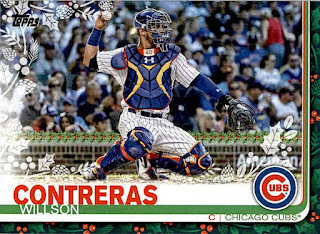 This SP has a more subtle variation. I had to look twice to catch the garland along the wall! 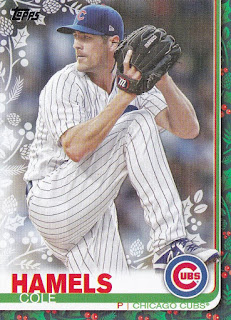 Topps missed a golden opportunity by not printing his name as "Coal" - how funny would that have been? 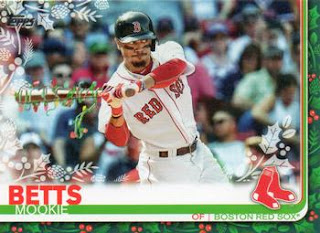 Not that I'm biased or anything, but this is easily my favorite variation so far. I wonder if Mookie hates untangling strings of lights as much as I do? 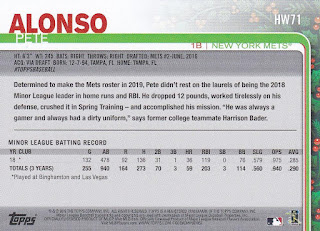 Here's what the backs look like. Same as the base set, but continuing with the holly border and Christmas color scheme. 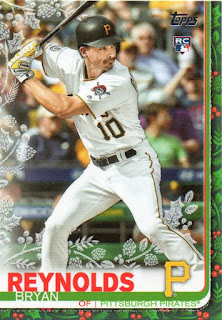 Every pack comes with either a variation card or one of these Snowflake parallels. It's not easy to see on a computer, but it's sparkly. I'm not a fan of glitter, but it works well with the card, especially the thin line of sparkles they use along the curvature of the border. 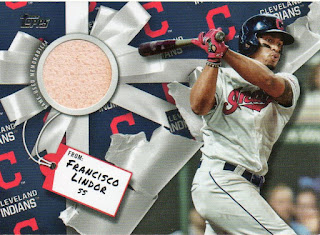 Every box comes with either a relic or autograph. Although this relic is pretty bland, it's nicely "packaged"!

As I have mentioned, this set has a whimsical feel to it that I really enjoy. The set is only 200 cards, and has few inserts/parallels diluting it. I could see myself buying another box of this. That may be all it takes for me to decide and complete this set too! Good job, Topps! See what's possible when you give us actual borders?
Posted by Matt at 10:00 AM 4 comments: 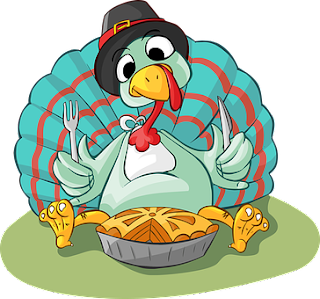 Happy Thanksgiving! I'm beyond ready to enjoy a fantastic dinner with family and friends. I have much to be thankful for, including when it comes to trades!

Today's trade recap comes from a TCDB member named Barry. Barry helped me whittle down my 1981 Topps set needs with a few cards, including the last Red Sox card from the set I needed! 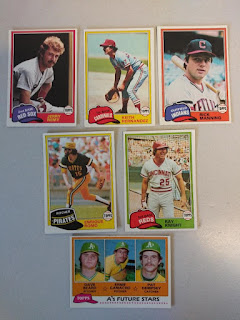 Barry also sent some modern cards, mainly from this year: 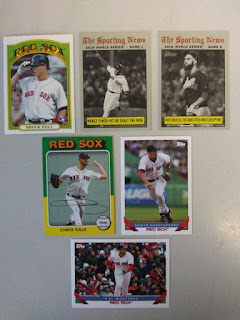 The Brock Holt rookie was actually a replacement for another agreed upon card. After agreeing to the trade, Barry realized he had given away one of the cards, and offered up a replacement. I think this is the first real "blip" I've had with trading on the TCDB, but it was never a big issue due to good communication between us. These things happen, and how Barry handled it told me more about what a good trade partner he is than any of the previous smooth trades I've completed thus far.

Thanks again for the trade Barry!
Posted by Matt at 10:00 AM 1 comment:

Rookie of the Year
Most Valuable Player
Good start to career!


Not too shabby for only being 24 years old!

A few weeks ago I created my all-time team of players who have played for both the Red Sox and World Champion Nationals. Because I see the Washington team as a separate entity than their Montreal predecessors, I limited myself to only those players to done the curly W. Fifteen years of existence did not give me much to work with. Many viewers commented on how much different the team could have been had I included Expos players too. I knew of 4 Hall of Famers off the top of my head, so I decided to go ahead and give the Expos their proper due. Here's my team:

Granted, if I was truly trying to make the best lineup possible, I could have should have gone with Tim McCarver. In my defense, how could I not add the awesome mustache of Mr. Blackwell?

The first Hall of Famer in the lineup, Perez went from the Big Red Machine to spending 3 seasons with each of these teams.

Mike Lansing was a solid regular for 9 years, debuting with Montreal in 1993.

Cabrera is possibly the most famous Red Sox player to only spend a half-season with the team. His Gold Glove defense softened the blow of trading away Nomar Garciaparra as the Red Sox won the World Series in 2004.

This two time All-Star finished his career as a mid-season acquisition by Boston in 1988. Pretty cool when I can show off a player's rookie card and sunset card here!

Floyd was another half-season rental for Boston, who acquired the former All-Star at the trade deadline in 2002.

The only time this Hall of Famer spent in the American League was the two years he spent with Boston as their designated hitter.

Fun fact: Between 1993 and 2003, "Jurassic Carl" switched teams 5 times. He was traded every single time. He was a talented hitter but his personality made it hard for him to establish himself with any one team.

Baseball Reference states that an 8 WAR season is an MVP level season. Pedro hit that mark 4 times, including an amazing 11.7 WAR in 2000. Many people felt he should have won the MVP award over Ivan Rodriguez in 1999, but that 5th place finish for 2000 MVP is equally egregious.

Lee Smith may be a Hall of Famer, but his impact in Boston and Montreal was fairly minimal. I chose to honor a man both cities remember fondly!

Since I omitted an obvious Hall of Famer at closer, I'll make up for it by showcasing a Hall of Fame Manager! Williams of course lead the "Impossible Dream" Red Sox in 1967!

This is a much more solid lineup, and it's no stretch to say that if I made by Nationals/Red Sox team include this franchise, it would have consisted of all Expos players and looked just like this.
Posted by Matt at 10:00 AM 3 comments:

I saw this floating around the internet awhile back, and since I could use a nice blog filler today, let's make out a lineup!

Not bad at all! 3 Hall of Famers, 2 guys who would be if not for PED issues, a certain inductee in next year's class, and a bunch of guys with strong Hall cases. This line up would win a lot of games, but what fun would it be if we stopped here? If we can find a few $1 and $2 guys we can live with, then we can upgrade elsewhere. Right off the bat, I see 3 spots where lower dollar guys would be as good if not better than who I have now.

Who put Chase Utley above Robinson Cano? Cano is a no-brainer upgrade at a lower cost. Kimbrel seems like a worthy swap for Wagner, and for only a buck! I picked Pedro over Clemens because Pedro dominated during the steroid era, and in a league of super players, I think that would be an important factor. That gives me $4 dollars to upgrade on. Since I'm upgrading, I might as well procure arguably the best player on here, Mike Trout. I'll also upgrade LF and take the greatest leadoff hitter in history, Rickey Henderson.

There are 6 spots I haven't touched yet. Of those, C concerns me most. I'd ideally like to upgrade to I-Rod, but to do that I need another $1 somewhere. Jeter and Larkin have amazingly close resumes, so I don't think I'll lose much going with Larkin. That'll give me enough to afford Rodriguez.

I'm not going to lie, I like this lineup a lot. Every one of my position players has won at least one Gold Glove, but they are primarily known for their offense. I've got speed, I've got power, I've got guys with great on-base skills. Yeah, I'll take my lineup over anyone else's!

Who do you got?

A small trade today, from a TCDB member named Will: 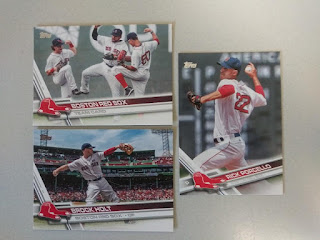 I miss when the Red Sox outfielders did their "Win-Dance-Repeat" routines after wins. It was so much fun to see what they came up with. However, my favorite card here has to be the fantastic photo on Brock Holt's card.


Strasburg may won World Series MVP, but you have to think Eaton was on the short list of contenders. He had at least one hit and one RBI in each of Washington's 4 wins!
Posted by Matt at 10:00 AM 1 comment:

Last month, I put four cards on the proverbial chopping block. No one wanted them, so they have been pulled from the trade stack and joined the rest of the 1973 Topps cards in my collection.

It wasn't a complete loss, however! I managed two more trades, and now there's a dozen new cards to tempt you with! Will there be anything you need for your collection? Read on!

The first trade came via the TCDB. A Pirates fan named David offered up some great cards for some of the Pittsburgh-centric cards in the stack.

Starting off with a couple of newer cards:


As well as some vintage, including the rookie card of Indians legend Rocky Colavito!


David also included a Carolina Hurricanes pocket schedule as filler/protection. I know some people collect these, so I figured I might as well put it up too! 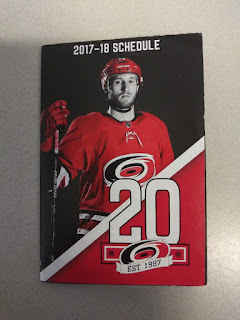 Gavin at Baseball Card Breakdown also made a trade for a short stack of 1976 cards. In return, I got a few more classic 1972 cards. Anyone want a vintage card of Hall Of Famer Sparky Anderson?

Thanks for the trades David and Gavin!

I've got one more trade currently in the works. That trade will put me at 48 completed Time Travel trades! I'd like to get to 50 before the end of the year! I'll need your help to do it though! Help me keep this project going! Comment below or send me a trade offer through the TCDB (My handle there is Kep75).