My attempt to collect all the Red Sox gold parallels from their 2018 World Series Championship season inches closer with a recent TCDB with a fellow collector named Stan from Champaign, IL. There's nothing quite like a good Laser Show! 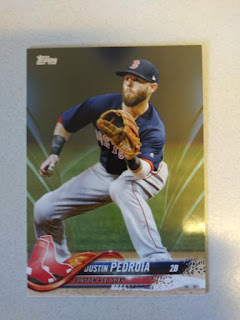 Sadly, there's not much to say about Pedroia's 2018 season. After having complete cartilage restoration in his right knee during the off-season, he managed to play a total of 3 games for the season before knee issues wiped out the rest of his season. He did not appear on the postseason roster, but was cheering his team on from the dugout. After an equally frustrating 2019 season, his career may possibly be over.

Thanks again for the trade, Stan!

With this latest acquisition, I'm up to 4 of the 31 cards in the team set. Only 27 to go! If anyone has any they are willing to trade, let me know! You can check out this list on my Golden Sox Project page!
Posted by Matt at 10:00 AM