Red Sox All-Star ace
Celebrates birthday today
Today is mine too!
Happy birthday to Chris Sale! Here's hoping his rib fracture heals smoothly and he can get back on that mound!
Source: I've known this for years... ;)
Posted by Matt at 10:00 AM 10 comments:

It's almost like it was planned. The day after MLB announced the end to the lockout and that the baseball season could officially begin, I found a sizable amount of 2022 Topps at My local Wal-Mart! There were no individual packs, just boxes and hangers. I grabbed one of each, and joyfully ripped into the hanger box, just so I could give you my first impressions! 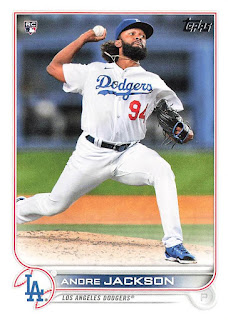 Thanks to a recent Night Owl post, I looked back and discovered that my first card for the past three base sets have all been Dodgers (Tony Gonsolin in 2020, Julio Urias last year). That's an odd streak, and I have no idea who this guy is! 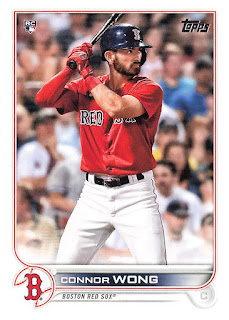 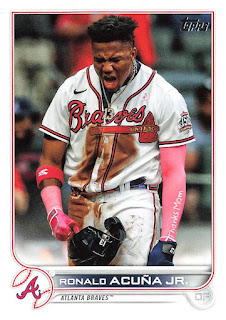 We haven't talked about the design yet. From the moment the design was first released to the public, I've dubbed this the "Wrench set" since that what the bottom banner reminds me of. I like that Topps is using some curved lines in the design, and the partial baseball logo works well. Names are more readable than last year, but the team name is still too small and the position is so faded I wonder why they even bothered. It's better than what they've put out the previous two years. 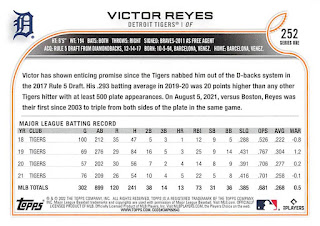 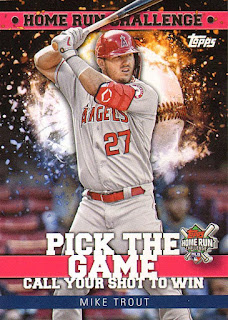 I'm digging the design of this year's Home Run Challenge cards, with the exploding baseball in the background. 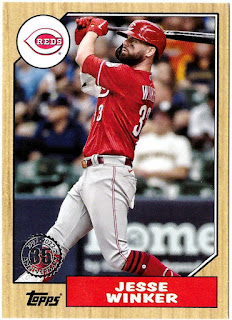 I get it. Everyone is sick of the 1987 design, it's been used again and again until it's become cliche. You know what? I still love it. No other design takes me back to my childhood quite like that wood-grain border. Give me all your unwanted  '87 Topps redesigned cards! 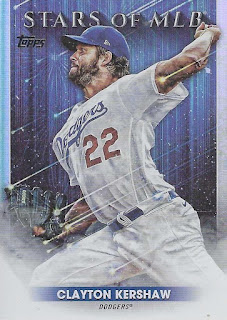 These remind me too much of the "Stars Of The Game" inserts from 2019. 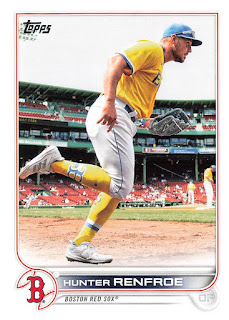 Another Red Sox player, this time in the yellow "city" uniform. I've seen less than half of the set, yet I'm convinced no other set has ever show as  many distinct uniforms. It almost feels like every player is wearing something different. (Hmmm...might make an interesting blog post...) 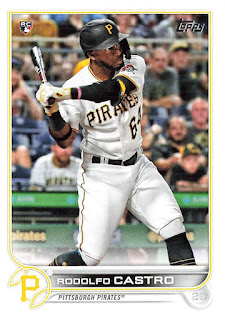 Am I the only one who looked at this card and thought he had three consecutive o's in his name? A failure of fonts! 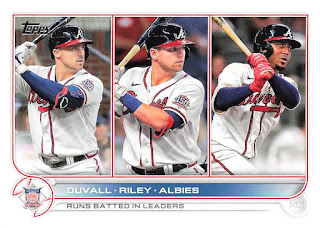 The top 3 league leaders are all from one team. I wonder if this has ever happened before?

It's always cool when you catch something when cards are back to back. In this case, we have two players in mid flight! 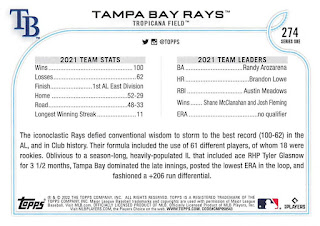 Add this to the list of things that annoy me about the Rays: 100 games won last season, without a single pitcher qualifying for the ERA title?

#255 Chicago White Sox (TC)
#210 Oakland Athletics (TC)
#167 Daniel Bard
#289 Nate Pearson
Overall, I'm liking the set. It's not fantastic, but it's solid and more memorable than most of the designs they've pushed out recently. This may be the last Topps set we see without the Fanatics logo squeezed in somewhere, so if so it kind of marks an end of an era.
Posted by Matt at 10:00 AM 5 comments:

Trapped In Time: Remnants Of The 15th Trade

As far as these posts go, this one seems pretty much pointless to me. I have strong doubts this month's featured card will get traded, and yet I've already come to the decision that if it doesn't, I'm not going to remove it from the trade stack. Still, you never know, so let's look at this trade from April 2018:
Trade #15 Chad (TCDB)
Traded 04/11/18:
Received 04/19/18: 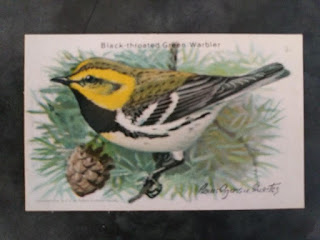 This was the first time in my life I had ever traded away a card from the 1950's. At the time, I sincerely thought this Church & Dwight issue would remain the oldest card I ever acquired. It's not even in the Top 5 oldest now. In regards to its fate, I decided that any cards older than 1950 should stay in the stack. It adds character to the stack and shows the possibilities to what this project has achieved. Besides, there isn't a single member on the TCDB with this card on their want list.
Poor little Warbler, no one wants you! *queue sad Sarah McLaughlin music* Only you, loyal readers, can rescue this tiny little birdie from a lifetime of purgatory...
(Oh, since I've only shown cards over 60 years old so far in this series, I promise next month's Trapped In Time remnant has a decent chance of actually being wanted/traded - it's actually a card from 80's, Tune in next time...)
Posted by Matt at 10:00 AM 1 comment:

Missed two full seasons
To treat his Tourette Syndrome
Kirby took his spot
Eisenreich temporarily retired between 1984 - 1987 to treat his mental neurological disorder. The Twins replaced him on the roster with Kirby Puckett. Eisenreich became the first recipient of the Tony Conigliaro Award in 1990.
Source: Wikipedia
Posted by Matt at 10:00 AM 4 comments:

A couple points of order before I show off the some cards. Neither the Clyde Vollmer nor the Jordan card generated any claims. Vollmer gets retired and added to my collection. As for Jordan, the response was pretty much unanimous that I should waive the "older card" requirement and trade it for something that might be more appealing. I'm going to be honest with you - I did not like the suggestion. It defeated the whole purpose of this project. Without the older card stipulation, this is just normal card trading, plus I got nervous at the thought of trying to pull off a fair vintage trade. However, since I sought your counsel I decided to try my best to trade the Jordan card. On the TCDB, there were 3 members who had this card on their want list. I started out with a trade proposal to a member who just joined in January and hasn't made a trade on the TCDB yet, but actually had a few baseball cards that were older than 1956 on his For Trade/Sale list. I sent an open offer trade, explaining my project and leaving it up to them what to send in return. No response, and after 10 days I withdrew the proposal. Then I proposed a trade to that member who had another Flags Of The World card. They responded the next day, telling me that they were interested, but not only did someone else express interest in their card recently, but they didn't know where any of their Flag cards were at the moment. I told him I'd rather have him have it than let it sit in my box, and told him to make a counter-proposal. He never responded after that. The third collector seems to only log in every couple of weeks, which is why he was the last one to be offered a trade. He hasn't logged in since I offered the trade, but I'll keep the offer up for a little while longer. If I don't hear from him this week, the Jordan gets retired with the Vollmer and added to my collection. I'm sure I'll think of something to do with it.

The second point of order - I found 2022 Topps! The day after the lockout was announced, my local Wal-Mart had numerous boxes of the product. No individual packs however, so I took one from the retail box I bought and have made it available in the trade stack (sorry, no Wander Franco!) 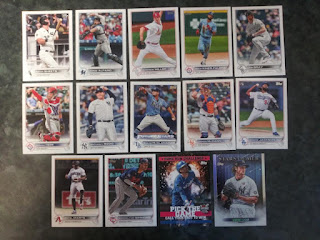 On to the trades! I'm excited to say that I mailed out PWEs for 8 Time Travel Trades since our last update - that's a new high for me!

Our first card is from Greg (Night Owl Cards). This was one pending return I was awaiting from last time, and not one of the 8 new trades (although Greg has one of those too!) He claimed a 1970 Topps Angels player, and sent another Angels player from the year before:


Next we have Jeff (Wax Pack Wonders), who took a nice selection of 70's and 80's cards and returned fire with his normally great selection of cards!


At this point I would like to state that I using my position as the manager of this project to claim one of these cards before any of you get a chance to. That 1978 Topps Keith Hernandez was one of 15 cards I needed to complete the set, so I'm snagging it and putting this card in its place:
Long time blog reader Ken returns to the Time Travel Trading action. He claimed a dozen cards, including all those O-Pee-Chee hockey from last time, and sent back 2 dozen football cards in return!

Anyone collecting 1977 Topps football?
I'm excited about this next one! A TCDB member named James offered up a cool card in exchange for one I had here. Unfortunately, he wanted one of the OPC hockey cards Ken had claimed. Still, I was eager to add this card, and there were a few other Time Travel cards on his want list, so made a counter-proposal and luckily he accepted. The Time Travel Trading project can now add a vintage Japanese baseball card to its ranks!

Bo (Baseball Cards Come To Life!) must have had the Dodgers on the brain for some reason, because his monthly contribution is a bunch of Dodgers, plus a particular Kellogg's card I thought might generate some interest here.

Chris (The Collector) makes Time Travel Trading history by sending me cards from 5 different sports! The big 4 sports are frequently seen here, but Australian football? That's new to me!

Next up we have Hal, who made a TCDB trade with me to add some more 70's baseball to the stack. Strangely enough, that's the 3rd 1970 Carlos May currently in the trade stack. I never thought I'd get to a point where I'd have triples of a card here!

Our last trade of the day comes from Brendan (The View from The Third Floor). He picked up a few cards, including an autograph, and sent back a relic card plus a few others:

This month adds over 70 new cards to the project, and I have 2 trades still in progress!
As always, these cards are all available in exchange for an older card! You can claim your cards below, or through the TCDB (Kep75). Let's make some trades!