Marty: What about all that talk about screwing up future events? The spacetime continuum?
Doc: Well, I figured, what the hell?
- "Back To The Future"

On the TCDB, I have two collections - my main one and one for the Time Travel Trading Project cards. All of Time Travel cards are marked as "For Trade". For those unfamiliar with the Database, members can mark cards for their want list as well as for sale/trade. This make it easy for other members to search for cards you may have available, and offer cards you may want.
The big problem  I run into (and I'm sure I've mentioned this before) is that the searches don't differentiate between collections. Therefore I get a lot of trade offers where someone wants a vintage card from my Time Travel collection, but offers something modern off of my want lists in return. This happened 4 times since my last update. When these trade offers come in, I have a few options:

The first thing I'll do is check the other person's collection and see what else they have available for trade. If they have older cards that would satisfy my project's parameters, I'll offer a counter-proposal and explain what my project is about. This is the case with Timothy, who had his eye on a few 1960 Topps cards I had. Fortunately, he had a few 50's card on his trade list, and we were able to work out a deal:

If the other trader doesn't have older cards on his trade list, I'll look at my personal collection and see if I have any doubles that I could use in their place. I'll essentially make a trade with myself for the Time Travel cards, add them to my collection, then make the trade. Two of the trade offers I received were of this variety, and so now I pulled these cards from my collection and added them to the stack:

Well, Option #3 has never come into play before now. It's not something I thought would ever happen, honestly. Here's the story: A TCDB member messaged me and stated he was very interested in the '55 Bowman cards I had. The problem was he didn't have anything older and wanted to know if there was any way I'd part with them for cards that were newer than 1955. The whole premise of the project is to trade for older cards, but I broke my own rule and made the trade anyway. I have a few reasons why:
After some back and forth negotiating (which was incredibly fun because we kept injecting "Back To The Future" references in our correspondence), we finally pulled the trigger. This is what I ended up with: 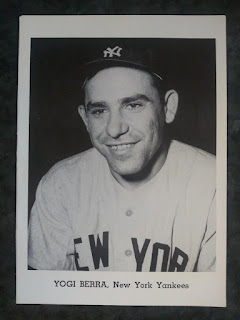 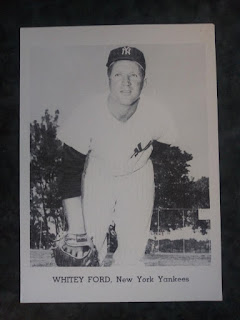 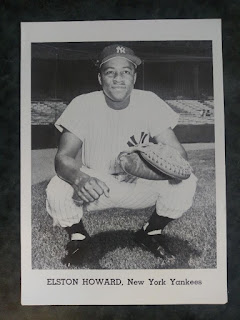 Yep, I actually sought out Yankees! These were released by Jay Publishing in 1963, and although the Database list them among the card sets, these are more like 5x7 photographs. Hey, if the TCDB counts them, then so do I! Still, it's not often you have a Yogi Berra from his playing days for trade (Ford and Howard are no slouches either - RIP Whitey!) and I'm very interested in seeing what kind of offers these three will generate.
There was one trade I made that was just a straight-up classic trade. Thanks to a collector named Sky, I turned a 1966 football card into a team card from a long since gone team:
Thanks to all my trade partners! If you see something you're interested in, let me know!