2020 sure is hitting us baseball fans hard, isn't it? Seaver, Brock, and now Bob Gibson - this just sucks. Gibson hits a little close to home only because he was my uncle's favorite player. Once again, I present the Top 5 cards in my collection (plus a bonus) in chronological order. 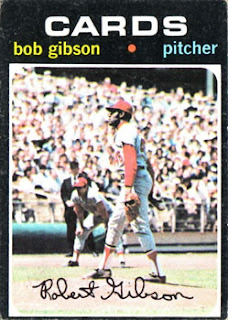 This card was one of the first I ever showed off on my blog. As I have said, my uncle is a big Cardinals fan, and Gibson was his favorite player. I got this card from him, and it's the one card I'll always associate with him. 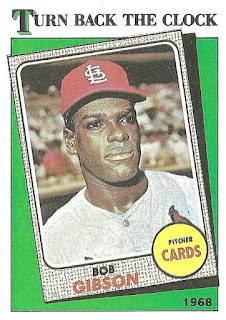 Like a lot of people my age, my first experience with legends from our past came from these Turn Back The Clock cards. To be honest, this was probably my first Gibson card. 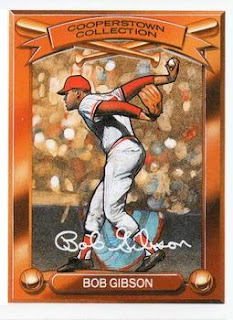 Two things I love about this card: The windup pose, which is phenomenal, and the fact on the back that his nickname was "Hoot" - before this card, I never knew he had a nickname other than "Gibby". 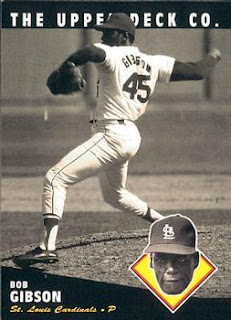 This card almost has a Conlon Collection/Sporting News feel to it. I always like the black and white photos, although that yellow diamond behind his head is a little distracting. 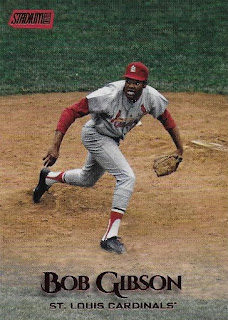 We'll finish off the tribute with this red foil parallel from last year's Stadium Club set. Everyone remembers how incredible of a pitcher he was, but Gibson was a great fielder too. He won 9 straight Gold Gloves from 1965-1973. Whatever he's chasing here you can bet turned into an out. 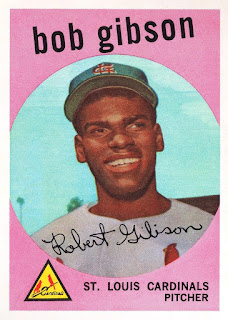 Gibson died after a long fight with pancreatic cancer. In this past week since he's died, I've had Facebook memories remind me of a college friend who also died of pancreatic cancer 3 years ago plus a former coworker/friend who passed from breast cancer 16 years ago. Brian at Collecting Cutch has been holding another contest during his annual Save Second Base series for Breast Cancer Awareness month. This contest involves showing off pink cards and Brian will make a donation for each comment on that post towards the cause. I've been trying not to just shoehorn a pink card into my posts for a cheap contest entry, but with all these reminders how cancer sucks, I figured showing off Gibson's pink rookie card seemed appropriate, even if I don't own it.
RIP Bob Gibson, you will be missed!
Posted by Matt at 10:00 AM