This is a small trade, but it has a good story. I made a trade with a relatively new member to the TCDB named Mark. I sent out a few extra 2019 Topps I had in exchange for these two cards: 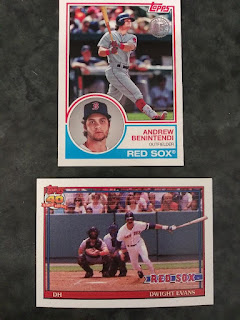 It's the Dwight Evans card I want to talk about. This card from the 1991 Topps set came in both an ERR and COR version. (The error, if you're curious: not getting that little diamond on the stats to notate he tied for the league lead in games played. I know, not earth shattering.) Now, I'm not one to go hunt down every variation of a card, but in this case I wanted both copies. It's one of my favorites from the underappreciated 1991 set. If the picture was clearer it would be Stadium Club worthy. I had the error card (a few copies of it actually) but the corrected version alluded me until Mark offered it up in a trade.
Sadly, when the cards arrived, I checked the card and realized that I had yet another error version of the card instead. I wasn't upset. It's hard to keep track of these minor variations, and I'm almost positive I've got a few mislabeled in my TCDB collection. (God help those poor souls that are trying to collect variations of those late 80's Donruss sets!) Still, I messaged Mark about it to see if this card was sent to me in "error" (See what I did there?) or if it was just a case of the card not being entered correctly.
It's great when trades go smoothly, but the real measure of how good a trade partner is happens when something goes wrong. In a 15 minute span, Mark sent me three messages: an offer to adjust what I sent to him, another offer of a replacement card, and finally a I just bought the card off eBay and will send it to you as soon as I get it. Wow! I would have been content with either of the first two options, but Mark went above and beyond to get me the card he initially offered me. That's an A+ trader in my book.
Thanks Mark! I hope we can match up on another trade soon!
Posted by Matt at 10:00 AM 2 comments:

Congrats "Big Papi"
New Hall Of Fame inductee
First ballot legend
Congrats to Red Sox legend David Ortiz on his election to the Baseball Hall of Fame!
Posted by Matt at 10:00 AM 2 comments:

To quote the Roman philosopher Biggus Smallus (not to be confused with Biggus Dickus): "Mo' Money, Mo' Problems". With success comes a different set of challenges, and I've come to realize that applies to the Time Travel Trading Project as well. That's right friends: Mo' cards, mo' problems!
Ok, so I'm being a little dramatic. It' not really a problem, but holy cow have you seen how long the trade stack has gotten? It's over 400 cards now! It's a good problem to have, and I'm extremely grateful for the generosity of my trade partners. Without them, this project would have lost steam years ago.
The fact remains, however, that the storage box holding my Time Travel cards is getting low on space, and I feel that the time has come to start culling some of the more tenured cards from the stack. I still have a bunch of cards that have been here since 2018 when I first started this. I'm not quite sure how exactly I'm going to do this, but I think I may go through and give the oldest cards one last pimp on the blog before retiring them. We'll see, I've got ideas, and no shortage of options.
Anyway, on to the trades!
We'll start things off with my latest trade with Greg (Night Owl Cards). He took a couple of burlap ballplayers, and sent back an assortment of goodies. I'm always happy to see Red Sox cards, especially now that I know there was a Negro League team in Memphis  with that moniker!


Brendan (The View From The 3rd Floor) is next with one of his always amazing bribes trades! Yep, that's another autographed card that Brendan has included!


Jeff (Wax Pack Wonders) clocks in again with an assortment of vintage, headlined by a Hall of Fame manager!
New to the ever growing list of trade partners is TCDB member Chris. Who knew the Red Sox were so colorful in 1960!

Bo (Baseball Cards Come To Life!) took advantage of an influx of football cards to pad his collection. It's always fun when I have to take multiple pictures of a single trade! Starting out with some eye-catching 1972's...

Along with an assortment of other baseball cards, including a gas station card I've never seen before (the Tommy John).

The most noteworthy card however is this cool serial-numbered acetate card!


Five trades not enough for you? Good! Because Jim (Cards As I See Them) snagged a trio of 1985 O-Pee-Chee and sent back some nice 70's cards!

As always, these cards are all available in exchange for an older card! You can claim your cards below, or through the TCDB (Kep75). Let's make some trades! 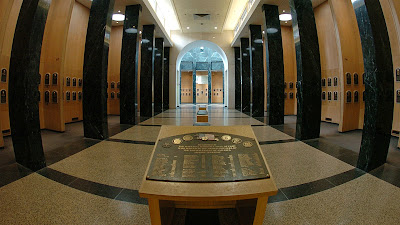 On January 25th, we'll find out who gets to join an impressive 6 new veteran committee elected players in next summer's Hall of Fame festivities. I enjoy this time of year, especially as voters reveal their ballots. I actually like reading about these votes, and the thought process each writer makes in choosing who they think is worthy. I wish more writers gave us a inside look at their choices. It's fascinating.

For the past few years, I wrote about who I felt deserved to get elected. I decided to do that again this year as well. Pardon me while I copy and paste from part of my original post from 2018:

I'm excited Ortiz is finally on the ballot, and hopefully he'll get in this year. Scott Rolen is someone I initially didn't think was a rock solid candidate, but the more I read about his candidacy, the more I became convinced he had a special blend of excellence on both offense and defense. He's one of the 12 best third baseman all-time!


Andruw Jones - A decade of being one of the most dynamic and electrifying players in baseball might be enough to overcome a legendary drop-off in production.
Jeff Kent - The greatest power hitting 2nd baseman of all-time isn't getting the look he deserves.

Sammy Sosa - It's hard to not have a member of the 600 home run club in the Hall.

I'll be honest, I'm not convinced any of these guys belong. They're on the ballot, and have genuine cases though. I'll have to put more thought into it.

Outside of Ortiz and Rodriguez, none of this year's first timers have a strong case. A part of me wants to bump Torii Hunter up a level, just because he was so fun to watch and was an amazing defender. Abreu never struck me as a Hall of Fame player during his playing days, and seems to be a candidate just because he was consistent. I never thought Omar Vizquel was a Hall Of Fame player - he was below average offensively - but it appears his post-playing career drama has made that argument a moot point. If any of the new guys gets past the 5% threshold, I may give them a deeper look.


Bonds, Clemens, Ramirez, Rodriguez, Sheffield, Petite and Sosa are held back due to their PED connections. That leaves just Ortiz, Schilling, and Rolen from the Definitely Worthy list and 4 guys from the Probably Worthy list. (And in case anyone wants to point out Ortiz - no, I have no reservations about his usage. His connection is flimsy at best.) Three spots remaining for the PED guys, and two are going to Bonds and Clemens.

One spot left. Ramirez and Rodriguez are definitely worthy, but they both got suspended after the drug policy went into effect. I'd rather give the last spot to either Sheffield or Sosa, neither of whom failed any tests during their career. It's a toss up, but since this is Sosa's last chance, I gave him the nod.

In the end, I expect Ortiz to just barely make it with slightly over 75% of the vote. Bonds, Clemens, Sosa, and Schilling will fall off the ballot and become future committee candidates.

No matter how it shakes out, it'll be another fun and exciting Hall class!