Did Gant keep moving?
Or did Hrbek lift the leg?
Depends who you ask...
In Game 2 of the 1991 World Series, the Atlanta Braves had a potentially big inning brewing. With two outs, Ron Gant hit a single that moved the tying run to third. He rounded first but had to sprint back to beat the relay throw. Had he been called safe, the Braves would have had two men on with cleanup hitter David Justice at the plate. History decided otherwise:

Watching the video all these years later, I can see how both teams could argue their cases.
Posted by Matt at 10:00 AM 2 comments:

Last month, I made mention of three autographs I had purchased through eBay. I showed off the Sparky Lyle before I had it hand, all for a contest I didn't win (Funny story about that though..but that's for another blog post!) Anyway, now that I have them, it's time to give them a proper showing: 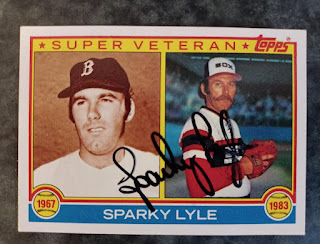 Obviously I'll start with Mr. Lyle. There's so much to love about this card. The signature is bold but legible. The card features him with two teams, and neither are the Yankees! On the left, a clean-shaven young rookie, while on the right a grizzled vet in the last year of his career in all of his mustached glory! 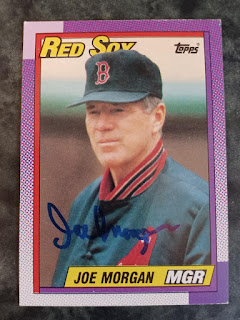 A member of the Red Sox Hall of Fame, he's the first "new" Red Sox manager I remember growing up, having replaced John McNamara at the All-Star break in 1988. 12 straight wins out of the gate gave birth to "Morgan Magic" and an AL East title. I've always appreciated when card companies try to be bold with their card design (yeah, I'm one of the few that really like Donruss's 1988-91 attempts), and Topps 1990 comic book panels really stood out to me. 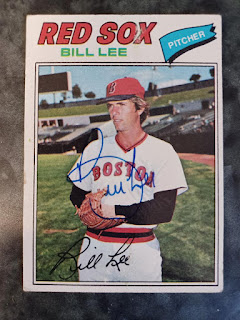 Last but not least, we have the always out there Bill Lee. Here's hoping that his recent medical scare isn't anything too serious and he can soon get back out on that ball field again!
Posted by Matt at 10:00 AM 4 comments:

Trapped In Time: Remnants Of The 23rd Trade 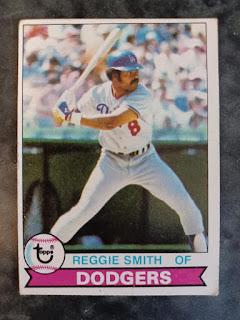 Outside a couple of giveaway posts earlier this year, Tom (The Angels In Order) has been retired from the blogging community. Back in the day, he was the guy when it came to collecting checklists. In this trade he acquired a couple, including a fantastic 1958 Pirates team card. Ironically, I was able to trade away the oldest card while a card 23 years its senior languished in Time Travel purgatory.
The 1979 set is an anomaly in my collection. I have over 70% of the 1977 and 1978 sets, over half of the 1980 set, and completed the 1981 set. Right in the middle is 1979 Topps which I have less than 80 cards of. I don't know why that is, but should no one claim Mr. Smith, he'll get me one card closer to maybe someday cracking the 3-digit mark on this set.
If anyone wants him, just offer me an older card!
Posted by Matt at 10:00 AM 1 comment:

Maddon disciple
Replaced Baker in D.C.
Led Nats to title
The Nationals haven't had a winning season since that magical 2019.
Edit: Ha! I just realized this is Martinez's second appearance this year in the Repack Haiku series! The first haiku can be found here: Repack Haiku #245
Posted by Matt at 10:00 AM 1 comment:

You guys are awesome. I just want you to know that. As of this post, I have completed 189 Time Travel trades (with 2 currently in progress)! This means that sometime in the next few months I will reach the 200 mark. That's an amazing milestone, and I think it should be celebrated! So here's what I'm going to do: Whoever has the honor of being the 200th trade can pick any card from the trade stack and I'll send it to them for free. Yep, any card - it doesn't matter to me if it's the 1890 Frankie Raymond or one of the new cards listed below. If it's in the stack when the mark is reached, it's fair game!
Speaking of new ones, how about we take a gander at the latest additions?
We start things off with not one, but two trades from Bo (Baseball Cards Come To Life!). Bo found quite a few cards to his liking, and claimed a bunch from the last update. In return we get a bunch of 70's baseball, 80's football, and Toys R Us rookies:
Before that trade, however, Bo had his eye on the 1934 Goudey that recently entered the stack. He acquired some tobacco cards, and sent along a great boxing card from 1910 to send for Shanty Hogan:


This is now the second-oldest card in the trade stack, and the oldest sports card!

Next up we have two trades courtesy of the TCDB. A member named Alex offered up a one-for-one:

While another member named Harry agreed to part with this quartet of cards from "The Empire Strikes Back":


Brendan (The View From The Third Floor) answered a question I've had for awhile: Will anyone actually trade for a couple of Australian Football cards? He did, as well as for a few others, and sent back this nice assortment:

Last but not least, I made a personal swap. I reassigned a few Red Sox card to my personal collection. I humbly offer these gentlemen in their place:
As always, these cards are all available in exchange for an older card. You can claim your cards below, or through the TCDB (Kep75). Let's make some trades!