"You're out of your mind! I'm staying, and your going!"

"Forget you, you no talent hack! I was here first!"

"No talent hack? You realize what garbage is coming out of your mouth?"

The bickering had been going on for almost an hour. On one side, Clete Boyer argued his case. Opposing him...Clete Boyer. Paul sat back and watched as a man born 82 years ago argued with another copy of himself. Stanley the security guard leaned over. "You want me to break them up,  boss? They're about ready to make this fight physical..."

"No, I'm actually curious on how this will play out." Paul really was too. Would an injury to one result in a similar injury to the other? Never before had the time machine brought back the same man from the same point in time. Usually duplicates of any ballplayer were separated and not allowed to even see each other, but in this case both Clete Boyers showed up too quickly. Now here they were, aware that one has to go back, arguing on who gets to play meaningful baseball again.

Amusing as it was, Stanley was right. One had to go back, and unless he interjected, the Boyer twins would just keep on fighting. Paul dug into his pocket as he approached the two men.

"Gentleman, this has gone on far enough. We'll flip a coin to determine who stays and who goes."

I apologize in advance. This is a very long post! I probably should have broken each trade into it's own post, but I'm just too excited for what came in. It's worth it however, as there a great deal of new cards to show off.

I've said this since the beginning, but this little project of mine would not have grown and flourished as it has without the amazing generosity of the people I traded with. More often than not, I've been on the receiving end of extra cards that well exceed the value of what I sent out. Look at the trade stack and at least 70% of the cards you'll see have come from two traders. These two guys are my unofficial "patron saints" - they just keep initiating trade after trade, and they always give more than they receive.  Both of these guys came through for me yet again recently.

First trade comes from a TCDB member named Gary. He originally offered up a trade for a 2018 Topps Instant Impact insert of Nomar Garciapara.

This was the original offer for Nomar - a great coin from 1964!


But of course, Gary couldn't just send that singular item. He had to include an amazing stack of cards, including some recent stuff...


...and finally some hockey and basketball!


Holy cow that's a lot of new cards, and that's just from the first trade!

My other "patron saint" is Bo from Baseball Cards Come To Life. From my notes, we've completed a record 5 Time Travel trades, and Bo always sends good stuff my way. This time around, I sent him a 1960 Topps card and the rest of the 2019 Topps cards. What did I get in return?

Well, he started off with some 70's Red Sox cards (an always welcome addition!)...


I'll save you the trouble of counting - that's 64 new cards added to the stack, and 159 total cards available!

Who's next? You don't need to be my next patron saint, you just need to be willing to trade me an older card than what I'm sending you! See something you like? Comment below or send me a trade through the Trading Card Database (User Name: Kep75)!

This is it! The final clue! (At least the final posted clue...)

Clue #1: He's a former All-Star.
Clue #2: He was once traded for a former Cy Young Award winner.
Clue #3: He was almost traded for a Hall of Famer.
Clue #4: He was drafted by Texas Rangers.
Clue #5: He has never played for the Boston Red Sox.
Clue #6: He has played in both the American and National Leagues.
Clue #7: He was born in Northern California.
Clue #8: He once struck out 21 batters in a minor league game.

Clue #9: He has three World Series rings, but none of them from his playing days!

The subject of the 100th Repack Haiku gets revealed on Wednesday! This is your last chance to enter, or change your guess if you've done so previously. You can also earn bonus points by guessing the year and brand of the card. Comment below!
Posted by Matt at 10:00 AM 3 comments:

Time to wrap things up with the last two packs I picked up on my Spring Training trip. Topps beat Stadium Club earlier, so let's see if this time will be any different. 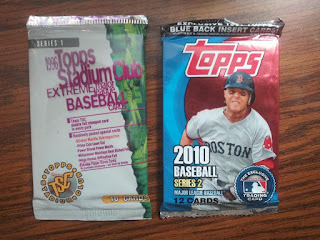 The last battle worked out well because both packs had the same number of cards in them. That's not the case with these two, so I'm going to do something different. I want to see which deck packed the most star power, so I'm going to look up the career WAR of every player (as of 2018), and take the average per card. The more stars, the higher the average WAR, right? I'm also going to compare the total number of All-Star appearances for the players.

I'll start out with the pack of 1996 Topps Stadium Club Series 1, showing off two cards at a time.

OK, so Stadium Club is not starting off strong, giving me two players who finished their careers with negative WAR values. At least Green breaks the All-Star bubble with one selection to the Midsummer Classic. (Totals: -2.8 WAR, 1 All-Star selection)


That's more like it! Wait, Jay Buhner only made one All-Star team? I'm rather shocked by this. But Buhner and Parris get Stadium Club out of the hole and provide a good foundation. (Totals: 25.2 WAR, 2 All-Star selections)


Boom! Stadium Club may have just ended this battle early with a non-rookie card of the 1996 Rookie of the Year and future Hall of Famer. Even a Red Sox fan like me can appreciate the fact this card makes the pack worth every cent. (Totals: 110.0 WAR, 17 All-Star selections)


Wow, Stadium Club, way to throw a double of Bill Pulsipher at me to wrap things up. (Totals: 170.5 WAR, 20 All-Star selections)

It's 2010 Topps' turn now! Can Topps overcome the mighty Jeter?


Right off the bat the Topps deck forces a judgement call. How to score this one? On one hand, it's a team card. However, since I'm judging by star power, you can't do much better than these two Hall of Famers. The combined WAR of Griffey, Ichiro, and Pedroia would already exceed the total for the entire Stadium Club deck. In the interest of keeping this battle somewhat fair, I'm not going to count team cards at all. Pedroia is still an excellent start though! (Totals: 52.1 WAR, 4 All-Star selections)

More unexpected WAR craziness - Raise your hand if you would have swapped Ryan Howard straight up for Ramon Hernandez in 2010. Yet Hernandez by virtue of defense had a better WAR. (Totals: 112.2 WAR, 9 All-Star selections)


Fun fact: I have 4 or 5 degrees of separation with Hermida. My wife's aunt is married to one of Jeremy's relatives. ( I forget exactly how, a cousin or something I think.)  Not a bad way to wrap things up, if I do say so myself! (Totals: 218.7 WAR, 21 All-Star selections)

We're getting down to the wire! Only one more clue after today!

Clue #1: He's a former All-Star.
Clue #2: He was once traded for a former Cy Young Award winner.
Clue #3: He was almost traded for a Hall of Famer.
Clue #4: He was drafted by Texas Rangers.
Clue #5: He has never played for the Boston Red Sox.
Clue #6: He has played in both the American and National Leagues.
Clue #7: He was born in Northern California.

Clue #8: He once struck out 21 batters in a minor league game.

That should narrow down the field a bit! You can probably guess the position he played now. Remember, you can also score points by correctly guessing the year and brand of the card. Those extra points could be the difference maker!