In a previous post, I mentioned how I went to a flea market and picked up 5 packs of cards for $1. I thought it would be fun to take two packs, open them up, and see which card would win in a side by side competition. As luck would have it, two packs I got contain the same number of cards, making them the ideal competitors! 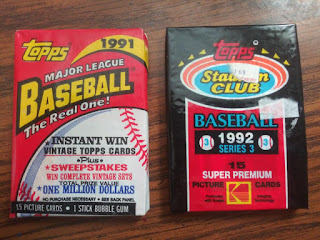 I've always liked 1991 Topps. The simple border and 40th Anniversary logo are well-done. Stadium Club has the sharp photography and the awesome rookie card representations on the back. I'm hedging that Stadium Club's overall photography will give them an edge in this contest, but we'll see!

Victory goes to the card I like best, whether it's due to the player, the team, the photography, or if I find something interesting/annoying.

Let's get ready to rumble!

Jim Leyland is a potential Hall of Famer, and manager cards are just cool. Belte's is just a slight angle adjustment away from looking like a Panini product.
Advantage: Topps 1991 (1-0)

Hmm...this is a tough one actually. Reimer is your run-of-the-mill bat on shoulder pose. The McCaskill bothers me slightly because both the background and the foreground are blurred, leaving just the player in the middle. It makes the ball look like a giant circle in the outfield. I guess I'll take the action shot over the posed one.
Advantage: Stadium Club 1992 (2-2)

Two fairly similar pictures, showing two pitchers after a throw. It's a toss-up, but I'm picking Zane for no other reason than Ward's uniform piping doesn't seamlessly transition from pants to shirt. Don't judge me.
Advantage: Stadium Club 1992 (2-3)

Teammate fight! Alou is the better player, and has the better uniform.
Advantage: Topps 1991 (4-3)

I'm not a Welch fan since he beat out Roger Clemens for the Cy Young award. However, his card is better Donnie Hill's.
Advantage: Topps 1991 (6-3)

Hall of Fame battle! Wow, do I go with a great photo of a young Biggio, or the awesome moustache of Morris? I may flip-flop on this one here, but for now I'm going with my gut instinct.
Advantage: Topps 1991 (7-3)

Yikes, this is turning into a bigger blowout than I would have thought!

Stadium Club stops the bleeding with a great angled photo! I do wish the guy behind him wasn't blurred though.
Advantage: Stadium Club 1992 (7-4)

Here's the windup, and the pitch! Former Red Sox Schiraldi was the losing pitcher for both the infamous Game 6 of the 1986 World Series, as well as the equally crushing Game 7. He can add this loss to his resume as well.
Advantage: Stadium Club 1992 (7-5)

Is it me, or does the Armstrong card look like a still from the movie "Major League"? I love that movie...
Advantage: Stadium Club 1992 (7-6)

Stadium Club comes back from behind to tie things up! This was closer to what I was hoping for! We're down to the last two cards. Winner takes all!


Congratulations to Topps. Stadium Club can take solace in the fact that all these Topps cards will end up in the double box. What say you? Who wins this battle if you were the judge?

Thanks to everyone who has made guesses so far! It's been great reading all the different answers. Has anyone guessed correctly yet? Time will tell. Until then, here's the clues you have so far:

Clue #1: He's a former All-Star.
Clue #2: He was once traded for a former Cy Young Award winner.
Clue #3: He was almost traded for a Hall of Famer.
Clue #4: He was drafted by Texas Rangers.
Clue #5: He has never played for the Boston Red Sox.

The sixth clue is worth 5 points. You can earn an additional 3 points for guessing the year, as well as another 3 for the brand.

Clue #6:  He has played in both the American and National Leagues.