I know, Gypsy Queen was released almost a month ago! But I caved in and bought a pack so I could give it a proper review. This is one of those 3 packs with some green parallels deals. 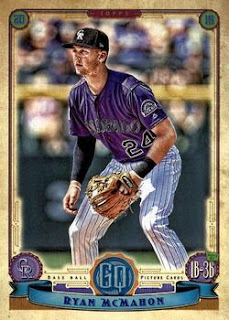 The honor of the first card pulled goes to the Rockies' corner infielder. For the most part, I like the graphical layout. The blue ribbon and circles are nicely done. (Maybe the GQ could be a little smaller...) The text however....wow. It's been said how small the print is, and they weren't kidding! Granted, you're not missing much on the front, but I will say this: the minuscule little "started at" tag above the position circle annoys me to no end. 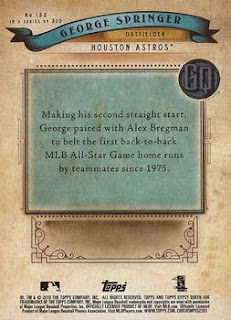 Let's talk about the back of the cards. Other than consistency with the  front, there is no logical reason to have the card number so small! My eyesight was never great but this is almost worthy of a magnifying glass. I like the simple trivial write-ups, but the copious amount of empty space leaves me wanting more. 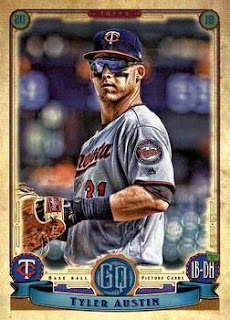 Rock those shades and eye-black, Tyler! 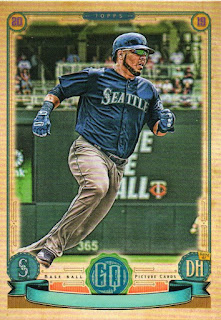 Does anyone collect these or find them remotely worthwhile? Missing nameplates have to rank among the worst gimmicks Topps has tried to pull off. 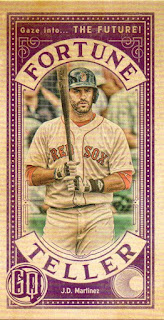 I'm not a huge fan of minis, but if I'm going to get one, at least it's a Red Sox card. It'd be interesting to see next year how well these predictions did. 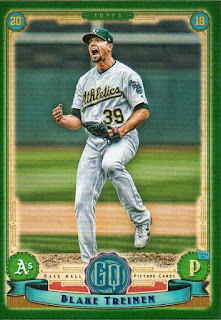 As you would expect from a green border, the Athletics cards look great!

Overall, it seems about more of the same from Gypsy Queen. I like the design better than last year, but I'm starting to wonder if this brand has run it's course.

Clues! Who wants clues? Get your clues here! As we inch closer to Haiku #100, each clue narrows the field down! You have these 4 already:

Clue #1: He's a former All-Star.
Clue #2: He was once traded for a former Cy Young Award winner.
Clue #3: He was almost traded for a Hall of Famer.
Clue #4: He was drafted by Texas Rangers.

Now, It would seem almost logical that I'd celebrate a milestone by focusing on my favorite team, wouldn't it? Well, I'm not:

Clue #5: He has never played for the Boston Red Sox.