When playing days done
Joined expansion Tampa club
Stayed 24 years
Foley was employed in a variety of roles in those twenty-four years, including a remarkable 13 year stint as the Ray's third base coach (a position he held under three different managers!)
Posted by Matt at 10:00 AM 1 comment:

This may be the first time I've traded cards to somewhere I've actually visited! TCDB member Aaron lives in Pittsburgh, where I've not only visited, but took in a Pirates game a few years back. I chipped away at some Red Sox base set needs for my efforts: 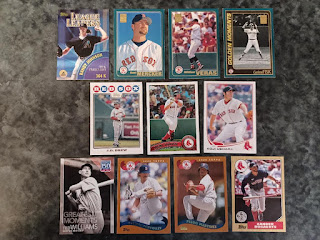 Favorite card: This is tough one. Eck's leg kick is fantastic, and a young Ted Williams is always a nice addition, but in the end I have to go with that iconic Golden Moment where Fisk waves the ball fair!
Thanks Aaron!
Posted by Matt at 10:00 AM 1 comment:

Trapped In Time: Remnants Of The 19th Trade

Sometimes you just never can tell. This edition of Trapped In Time was set to be a big one, with 3 cards showcased. However, after almost 4 years and after over 150 trades, one of those cards got claimed in the last round of Time Travel Trading!
Trade #19 - Gary (TCDB)
Traded 06/21/18:
Received 06/23/18:


The first Trapped In Time post I did featured another trade with TCDB member Gary. I said then that he was very generous, and this trade further confirmed that fact. He proposed a straight one-for-one trade, which on it's own was more than satisfactory, but when I opened the mail, he included an addition 2 dozen cards, most of them vintage! Of those 25 cards, only two remain: 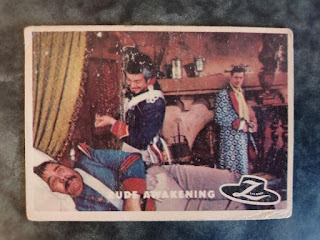 When I first saw this card in the stack I thought it was an incredibly cool addition to the project. Personally, I didn't recall ever holding a non-sports card from the 50's before. Although I'm familiar with the character, I've never seen any episodes of the TV show. There's a couple of potential trades possible, as there are 3 active members on the TCDB that have this card on their want list, but first crack goes to anyone reading my blog. if I can't swing a deal with it, I'm leaning on leaving it in the trade stack since it's such an unusual entry. 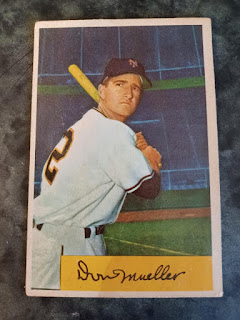 The original trade proposal was the 2018 Topps Opening Day insert for this card. Like I said, if the trade was purely just for this card, I considered myself very lucky and the recipient of a generous trader. The bonus cards just magnified the generosity. I wouldn't mind adding it to my collection, but I'd rather make a trade!
Last chance for either of these two cards! Make me an offer!
Posted by Matt at 10:00 AM 1 comment:

Ball hit him in head
Distracted by a spaceship
In "Men In Black" film
Gilkey failed to keep his eye on the ball during the climax of the hit film:
Posted by Matt at 10:00 AM 2 comments:

A belated Happy Father's Day to all you daddies out there! I hope you had a good day. Today I've got 6 trades to show off, including one that netted me my first Goudey! What wondrous new cards await you this time? Let's take a look!
Our first trade comes from Brendan (The View From The Third Floor), who helped himself to some football cards and sent a nice variety of stuff in return. It's not often I get a card back that was released this year as a bonus!
Bo (Baseball Cards Come To Life!) has been making some big trades as of late, and this big trade has all sorts of fascinating cards. Bo sent along an octet of Post cards:
Along with some Pinnacle and other assorted goodness (A certain Dodger fan might want to take note of those *ahem* Marlins cards...)
Capped off with some of that sweet, sweet vintage!

This is the second straight month I've received a 1961 Topps Ray Sadecki, which brings me to a point of order I should try to clarify. You see, last month's Sadecki has a lot of pen marks on it, while this one is in much better shape. In the past when I've had multiple copies of a card, I would trade the one that has been there longer (Condition-wise, they've always been close). Since there is a stark contrast between the quality of these two, I want to make it clear that the first person to trade for one of the Rays here will get the better of the two cards (unless the trader specifically requests the pen-marked card). I don't want anyone to feel like I'm giving them a lesser quality card when I have a better one available.
Moving on, we have a new trade partner via the TCDB named George. He made quite the first impression too!

It's a little worse for wear, but I'm happy to include the first Goudey brand card to the stack! The 1978 card is an O-Pee-Chee if you weren't aware, and is whippet racing still a thing?

Tom (The Angels In Order) has made a couple of unexpected appearances a year after retiring his blog. I was more than happy to send him a few cards in exchange for a trio of cards with no longer existent team names:
Our fifth trade was a simple one-for-one on the TCDB with a collector named Timothy:


Last, but certainly not least, we have Greg (Night Owl Cards) who picked up 4 cards for himself and one for another collector, sending this nice mix along the way. I also want to thank Greg once again for claiming the 1970 Red Rose Polar Bear from last month's Trapped In Time post. Not only did he get a great card, but the ALS Association got a donation out of it too!

Over 50 new cards this go-around! Thanks as always to my wonderful trade partners!