I caved. I don't have any conveniently located local card shops to visit, so I rely on the retail stores for my card fix. When I heard that Wal-Mart and Target had their own specials for National Baseball Card Day, my fear of missing out justified my purchase of a pack of Bowman Platinum. I don't usually purchase Bowman products, but I wanted those Gallery sneak peaks! 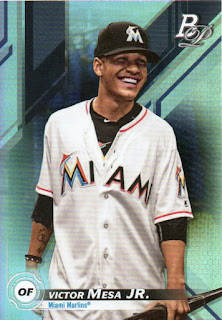 The honor of the first card goes to Mr. Mesa Jr. Right off the bat, I have to say I'm disappointed. This year's design is such a huge drop from last year's. It's proof that even shiny things can be blah. 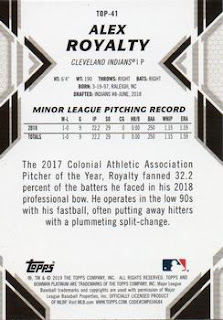 Here's a look at the back. Not much to get excited about here either. If this guy, doesn't play for Kansas City at some point in his career, I'll be disappointed. 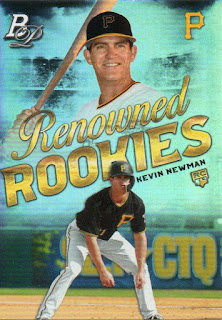 The first insert I get to see is the Renowned Rookies card of Kevin Newman. Not really a fan of the text right in the middle of the card, but at least I can appreciate a guy who's helped out a few of my fantasy league teams! 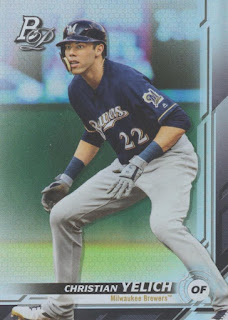 Here we have the Major Leaguer section of the pack. Although still uninspiring, I like this basic background much better than the angled cuts on the prospect cards. 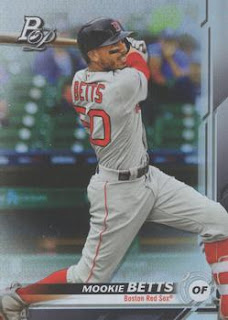 Mookie! This is the 8th set I've done a First Impressions post on this year, and in half of them I have pulled a card of last year's MVP. I've got the Mookie Mojo! 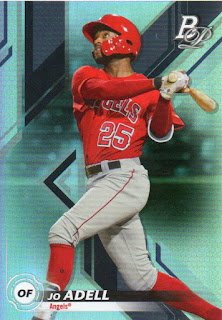 This would be the only prospect I've heard of.He's currently the #4 ranked prospect in baseball and could be a special player. 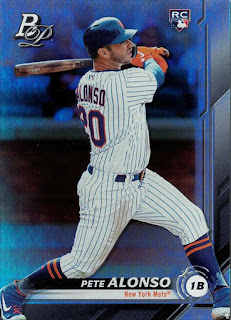 A rookie card of the eventual N.L. Rookie of The Year, and it's a short print too! Can I retire now? 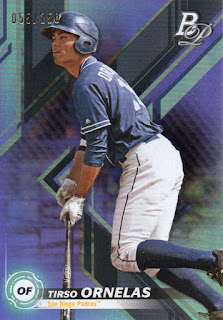 OK, cool, I got a SN250 parallel of someone I never heard of. I hope he has a very long and successful major league career!

Yeah, that's why I bought this. Don't judge me. 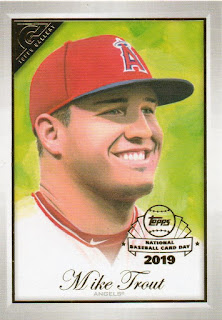 Not too shabby. Artwork looks improved, and I like the script they use for the name.

OK, so a mediocre product at best. You won't see me buying any more packs. Now if my Wally World would just start stocking Archives....
Posted by Matt at 10:00 AM 4 comments:

Email ThisBlogThis!Share to TwitterShare to FacebookShare to Pinterest
Labels: Haiku 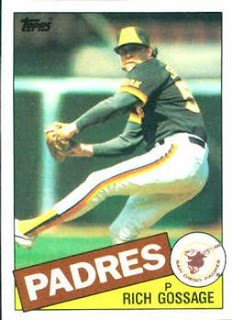 Does anyone call him Rich anymore? The man known to the world as Goose was smack dab in tne middle of his Hall of Fame career in 1985. It did, however, mark the last of Gossage's 9 All-Star appearances.


Ususally with the initial card I'll look for one of two types of players. Guys I know will be future Red Sox (Greg Harris fit the bill here, but he wasn't going to get me very far) and Hall of Famers on the early side of their careers. That makes Tony Gwynn an easy choice here, especially since it's fun to show two Hall of Famers side by side!


Over the course of his long and illustrious career, Gwynn had a lot of teammates who would go on to play for Boston. I eventually settled Matt Clement.


Clement had a short but unusual time in Boston. He made the All-Star team his first year with the Red Sox, then lasted 12 starts before getting hurt in year #2. He never pitched in the majors again. Still, he was there long enough to play with someone quite close to Mookie!


Alright, I cheated a little bit here. Technically, Alex Cora isn't a "teammate" but the connection is just too perfect!

There's not much Stadium Club left at my local retail store. As long as there's some available, I'll probably go with it at least until Archives shows up.


I love this card, but it makes me sad. You can't help but see his leg propped up and be reminded of the damage his knees have gone through. His career is likely over, and this card cruelly sums up his last few years in uniform.


As much as Topps likes to rehash the same photographs over and over again, Stadium Club more than makes up for it. Before I saw this card, I never knew how much I wanted to see a vintage photograph of a Hall Of Famer squatting back-to-back with a teammate in some sort of icebreaker/exercise. Amazing only begins to describe this card.

In the sports card blogging community, there are few annual events that generate as much anticipation as the Save Second Base event that happens every October on Collecting Cutch. To help keep our minds off of the summer heat and onto cooler days ahead, Brian is having a contest with a unique prize! All you have to do is guess who the N.L. leader in "two-baggers" will be! So head on over, take your best shot, or at least enjoy some lovely pictures of Anna Kendrick!
Posted by Matt at 10:00 AM 3 comments:

Sometimes you just never can tell.

There have been times when I have shown off cards for an update and I was certain someone would want them. Then I would get no offers at all. There are cards here that have been here for over a year, and I often think they'll never get traded. Then out of the blue, they get claimed.

Today's update features two big surprises. The biggest surprise is the number of trades - in the week following the last Time Travel Update, I received 5 trade proposals! I don't think I ever had that many in such a short span. The second big surprise...you'll have to continue scrolling to find out, but let's just say that 1938 card is no longer the oldest one available!

We have a lot to go through today, so let's get started!


A TCDB member from Espanola, NM picked up a couple of newer cards from this list, and sent me some slightly older cards in return. You've got to love that Mark Langston rookie card!


Next up comes a trade from another well-respected TCDB member from Arlington, TN.  This one focused on some vintage cards, and I'm very happy with the return package here! A couple of canvas Red Sox and a great team card of the Kansas City Athletics are the highlights here!


Eric from Old Red Sox Cards also reached out to me for a trade. In exchange for a few cards, I got a quintuple of Twins!


The next trade came from Gavin at Baseball Card Breakdown. He really loaded me up with some great vintage cards! Ironically, one of the cards I sent to him was a 1970 Topps Bob Miller, which was almost immediately replaced in the package Eric sent above! Bob Miller almost became the third card that would have appeared twice in the stack!


Technically, this trade was the first to get completed of the lot. I decided to save the best for last! Yet another member of the TCDB, this one from Portage, WI, took a 1957 Topps card off my hands. As a thank you, he gave me the bird. No not that kind of bird, but another Church and Dwight issue.


That, my friends, is a 97 year old card! The 1922 issue far surpasses the 1938 bird in this collection. I'm now officially curious to see if I can break the century mark! (And no, I don't see myself continuing this project for 3 more years!)

Over twenty new cards added to the stack! Which ones do you want? Make me an offer and help me keep this project going!

Favorites Through The Decades

Back in June, Chris from The Collector had a very well written and enjoyable blog post where he listed his favorite movie, song, and card design from every decade from the fifties to present. It'evolved to a bat-a-round and many other bloggers have offered up their take.

I was all on board too! Let me tell you, this was no easy task! Picking my favorite card design was pretty easy, but the movies and songs....yikes! So many choices, and every time I thought I had settled on a choice, a forgotten title popped in my head and made me question everything!

The obvious disclaimer is that all of these choices are subject to change. I wouldn't bet against me coming up with replacement choices even after this post has published!

The first 1950's card I ever owned was a 1955 Bowman Gil McDougald - that retro TV border has a special place in my memories. "Alice In Wonderland" continues to be a vibrant and visually stunning movie. Rock 'N Roll in the fifties doesn't get any better than Chuck Berry.

Those big waving pendants make the 1965 design an easy choice for me. Even today, if I see an unusually large gathering of birds, I get uneasy. Picking music gets terribly hard starting in this decade - Led Zeppelin, Cream, and Deep Purple all had contenders here. Even when I decided on the Beatles, picking which song of theirs was a task unto itself.

In the end, those little cartoon guys in the corner gave 1976 the edge. "Young Frankenstein" is one of those movies that, no matter how many times I've seen it, I will stop and watch again and again. I know all the lines, and still I find it funny. From it's lyrical poetry ("If I claimed to be a wise man, it surely means that I don't know...") to it's amazing guitar solo, Carry On is a stadium rock classic!

Favorite Song: "Birdhouse In Your Soul" by They Might Be Giants (1989)

I know everyone is sick of now, but 1987 Topps was the first set I completed by hand. The eighties had a ton of great blockbusters, but I decided on one that probably not a lot of people have seen. It's my favorite time travel movie! I've seen They Might Be Giants in concert 4 times, so I had to pick a favorite song from them!

You either love the pop-art comic style of the 1990 Topps borders, or you hate them. I'm in the former category. The Shawshank Redemption is one of those movies that I'll admit was better than the story it came from ("Rita Hayworth and Shawshank Redemption" by Stephen King). The Barenaked Ladies are another favored band, and this classic tune is something everyone can relate to.

Favorite Movie: The Lord Of The Rings - The Fellowship Of The Ring (2001)

I wasn't actively collecting during this decade, but the bubbles come to mind. The LOTR books are some of my all-time favorites, and the entire movie trilogy is an amazing piece of cinematic art. The Foo Fighters kick ass, that's all that needs to be said.

2015 Topps will go down as one of those iconic set designs, if it isn't already. I'm a big fan of the Marvel Cinematic Universe, and the first Avengers movie stands as the movie that first tied everything together. Even after 22 movies, this one is still fun to watch. The Avengers weren't the only super-group to return with this movie -  the first Soundgarden song in over a decade was part of the soundtrack, and it's hard to not love it. These lyrics still get to me:

So there you go, my favorites through the decade. Chances are by the time you read this, I may have other suitable choices in mind, but I'm content to roll with these.