Persistant Guessing Led To A Win(field)!

There was a contest over at Johnny's Trading Spot - He recently picked up a 1969 Milton Bradley baseball game. 4 players were missing, and the first person to guess all 4 would win a 1974 Topps Dave Winfield rookie card. The game itself seemed simple enough - the checklist showed the game included 296 players, pick the 4 that are missing.

Out of curiosity I found that picking 4 out of 296 cards led to 313,413,310 possible combinations (according to this Combination Calculator) - this could take awhile!

Fortunately, Johnny provided some hints along the way - 2 card were superstars, 1 a minor star, and 1 common player.

The two superstars got determined relatively quickly (Hank Aaron and Al Kaline). Another participant was able to determine the common player (Matty Alou). From there it was a race to find the last missing card. Johnny provided one final clue: the minor star was a Gold Glove winner and appeared in 3 All-Star games. A quick search on Baseball-Reference.com found two possible candidates - Joe Pepitone and Felix Milan. I chose Pepitone, while the other active participant quickly chose Milan. 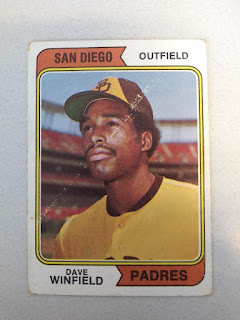 I made 17 guesses, involving 52 different players, over the span of 2 weeks.  It was a lot of fun!

In addition to the main prize, Johnny was kind enough to knock two more cards off my So Close! page: 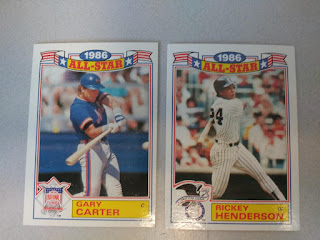 Thanks again for the cards Johnny! Enjoy your vintage game!
Posted by Matt at 10:00 AM