The year is almost over! Have you voted in the Single Elimination Challenge Finals yet? Why not? Vote now!

Chris from the blog Nachos Grande  decided to embrace the holiday spirit full tilt and be generous to his readers. He called it his Season of Giving, and basically he sent cards of a favorite team to whoever wanted them. How could I say no to that?

I was expecting a small package, but what I got was a small box - crammed with over 250+ Red Sox cards. It was a thing of beauty. There's just too much to all post here, so I'll showcase some highlights.

The rest of the box contained an assortment of cards from the late 80's through the current year. Lots of good stuff!


Chris did sneak in a non-Red Sox card in the pile. True, his Sox may be white here, but it's hard to complain about an all-time great like Fisk! I've always had a fondness for the Glossy All-Stars inserts too.


Maybe someone smarter than me can explain this, but I really don't understand why this isn't considered his Topps rookie card. It's his first appearance in the base set, and the base set immediately following his debut. It's even the year he won Rookie of the Year. Was the Topps 52 set really enough to be a deal breaker?

This is cool. I have never seen this before. All the thrills and mystery of opening a pack, with practically no potential for disappointment! I think opening the pack will be the subject of another blog post...


Chris, if ever there was a card to represent your generosity during your Season of Giving, this would be it! You really hit it out off the park here! Thank you very much!

Spoils of Victory, The Sequel

First things first - have you voted yet for the Single Elimination Challenge Finals? What are you waiting for? It's a great match-up and you help decide who wins!

I've blogged once before about the fantasy baseball league I won against fellow members of the TCDB. Earlier this month, I received another prize package from TCDB member boots1893 (aka Adam from the blog Addiction As Therapy). He sent along a nice card of current Red Sox superstar Mookie Betts:

Last March, I decided to do something different with the first pack of Topps base I opened. I didn't keep any of the cards. Instead, I sent each one off to the player with the hope to be autographed. I got one quick return that month (Brewers pitcher Junior Guerra) and a Return to Sender in April (Orioles infielder Johnny Giovotella). That was it. The season came and went, and to be honest I figured I wouldn't be getting anything else back.

Tuesday night, a white envelope with my handwriting was waiting for me. The return stamp hailed from Santa Clarita, CA - a Dodgers or Angels player perhaps? I couldn't recall what players I had sent to, or what team they played for. (I did recall about 1/4 of the cards featured players who were on new teams than what their 2017 card depicted, making this recollection exercise even more pointless.)

I opened it up, and there it was, a beautifully autographed card of one of baseball's young stars: 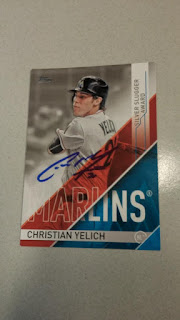 Yelich has been in the news lately, as one of the few notable players the Miami Jeters Marlins haven't traded (yet!). At 26 years old, with a Gold Glove and Silver Slugger already on his resume, he would be on any teams wish list.

Wherever he ends up, I wish him success!
Posted by Matt at 2:00 PM 2 comments:


This is it - the last match-up of my Single Elimination Challenge! After over 6 months of voting, you good readers have determined the final two cards. There were many great cards contending, but in the end we have a pair of 1960's vintage! Because this is the finals, and because it just happens to fall at this particular point on the calendar (Sorry, I won't be posting on Christmas!), voting for this match-up will last 2 weeks.  I'll announce the winner in the beginning of the new year.

The final vote is now in your hands. Comment below and let me know who should win. I'll also accept votes from the TCDB thread for this match-up. Only one can claim the title! Who will it be?
Posted by Matt at 11:28 AM 14 comments:

For this week's Payday Pack, I decided to join in and open up some of the new Topps Gallery. My initial impression: I think this is one of the nicer looking sets Topps has put out this year. I like the paintings paired with a simple border design. Rather than show the whole pack, here are my 3 favorites:


I'm not a huge fan of all the parallels that come in each set nowadays, it's just too much. However, I can't argue with this crisp blue border. The fact the team colors match the border make this even better!


I'm just going to come out and say it - I love this insert set! This is a beautifully done set and I would seriously consider attempting to complete it. I almost want Topps to produce a giant set like this featuring every Hall of Famer.


One of the earliest book reports I remember reading in grade school was a biography of Rod Carew.
Again, another well done use of a parallel - the green just makes this card pop!

There are cards in the collecting world that most collectors consider iconic - the 1952 Topps Mickey Mantle or the 1989 Upper Deck Ken Griffey Jr, for example. With the news this week that the Veteran's Committee has elected Jack Morris and Alan Trammell to the Hall of Fame, it made me wonder. Is it time to add this card to upper echelons of note-worthy cards?


Trammell's official induction this summer will make this card the rookie card for not one, but TWO Hall of Famers! That is unprecedented in the history of baseball cards, possibly in all of sports cards. (I don't collect other sports, so maybe someone can confirm this or offer another instance?)

This card was the subject of one of my very first blog posts, and as I stated then, I always though Trammell was worthy of the Hall. (Morris, to be honest, I was on the bubble about...) I was very happy to see the Veteran's Committee elect two players, which in itself was shocking after a track record of electing hardly anyone. They still deserve criticism for denying Marvin Miller, but hopefully these two players will open the door to other deserving candidates in the future.
Posted by Matt at 10:00 AM 7 comments:

Matt from the blog Bob Walk The Plank held a Secret Santa exchange with his fellow bloggers, and I jumped at the chance to join in. Last week I received my mystery gift.

My Secret Santa was none other than Tyler from Rekindling The Cardboard Flame, and I must have been a good little blogger this year because Santa came through in a big way!

Nothing like opening up a Christmas package and finding lots and lots of Red Sox cards!


Including a complete Series 1 team set of 2008 Topps, which is awesome because I wasn't collecting when these came out! 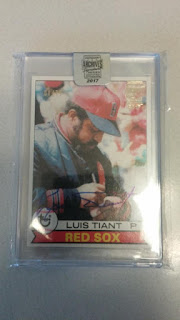 An autographed card of Luis Tiant! If I ever get a proper man-cave set up, this will look nice to the ball I have signed by him. (He's even signing a ball on the card!)

Thanks again Tyler! Merry Christmas to all!


The first card in our finals is set! Honestly, a part of me is sad that Schacht's smiling glare couldn't pull out the win, but Banks has been steamrolling through and has to be considered the favorite to win it all. Still, the Challenge continues, and Banks awaits his final opponent! 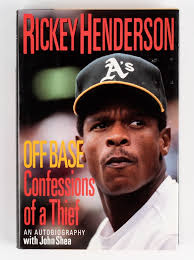 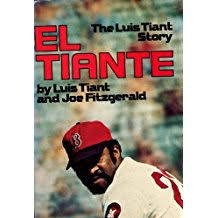 The voting booths are open! Comment below to cast your vote! (You can also vote on this TCDB thread!) Who's your pick?
Posted by Matt at 12:31 PM 5 comments:

P-Town Tom from the blog Waiting 'Til Next Year is having a contest asking his fellow bloggers to post their favorite card of 2017.

This is an easy one. There was one card this year that has put a big smile on my face every time I see it. To me, it represents everything good about baseball:


It's great, I absolutely love it. Hanley Ramierez photo-bombing a photo shoot, and the 3 pitchers just can't keep a straight face. I can't either. Sadly, I don't own this card...yet. It's still accepted under the rules of the contest, but let's showcase my favorite from my collection:


What makes this card so great is how well it parallels another iconic card. Back in 1960, there was another rookie star who played in front of the Green Monster at Fenway:


Alright, so Yaz started out at 2nd Base - we all know where he ended up! Still, the Benintendi is a great throwback card, and I was very excited to pull this insert in the only pack of Archives I was able to find in stores this year.

What's your favorite card from this year?
Posted by Matt at 12:40 PM 3 comments:


He really hasn't aged much, has he?


Our field of four is set! We kick December off with a truly heavyweight bout. Both of these cards have used their oddball charm to win over voters time and again. Both are great men who excelled at putting smiles on faces. 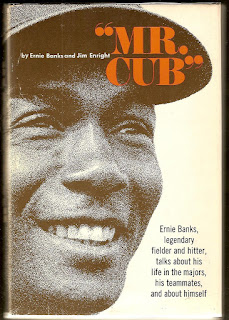 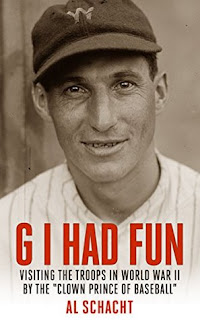 Comment below to vote! You can also visit the Trading Card Database and vote on the thread for this post!
Posted by Matt at 10:00 AM 7 comments:

The Best Free Stuff Is The Stuff You Stole

I'll admit it. I'm a thief. At least I have a thief's mentality when I play certain games, like the one Matt Prigge from Summer of '74 recently had. Matt gave away some cool stuff from his basement, and gave players an opportunity to pick a random prize, or steal an already revealed prize from another contestant. My wife's family plays this same game during Christmas, and it's always a lot of fun. My plan is always the same - hope I get a number in the later half of the game, so there's enough revealed prizes to potentially steal something good.

When my turn came up, I stole a very nice autographed photo of James Lofton. I'm not a football collector, but Lofton was a Buffalo Bill during their glory years, and you can never go wrong with a Hall of Fame player's autograph.

However, when the dust settled and everyone had picked, there was one unclaimed prize. Matt offered it up to anyone who wanted to swap out, and to be honest, it would have been my top choice to steal if it had been revealed at an earlier time. I took Matt up on his offer and gave up my autographed photo. 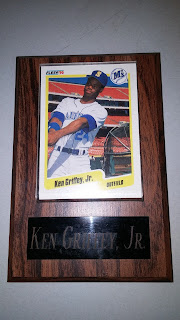 In addition to my Griffey plaque (which will eventually house one of his rookie cards), Matt was generous to send along a bunch of Red Sox cards as well. 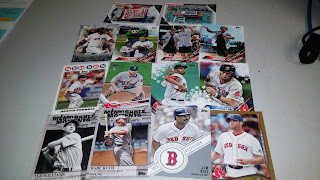 I didn't have a huge desire to collect this year's update set, so it's great that Matt sent me a good number of Red Sox inserts from that set. The Heroes of Autumn set is particularly nice. 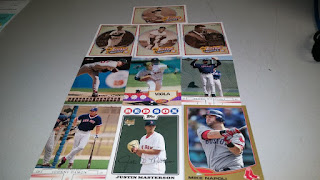 I'm now missing just one card from that 1992 Upper Deck Ted Williams set (not including the autograph of course!)

Thanks for having such a fun game Matt, and thanks again for the prize package!

Are you reading Matt's Summer of '74 blog? You should!