The Greatest Red Sox Cards Of 2020

Back down the rabbit hole I go...
Last year I listed the top Red Sox cards of 2019. It was a maddening exercise, but ultimately a fun one. Enough so that I decided to do it again this year. While I ended up with less candidates than last year (to be expected when you follow up a World Championship with a rather sub-par season) getting the list down to 10 cards was no less exhausting. There were many fantastic cards left out, that in all honesty, may be preferred upon future viewings. I even asked for help to get those last few cards in place! Ultimately, I got it done. I made my choices, and I'm sticking with them (for now). For you entertainment, may I present my humble opinion on the 10 best Red Sox cards from this past year: 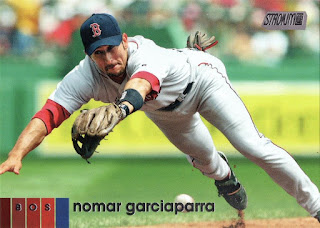 Stadium Club always has great photos, and the last spot came down between a couple of Stadium Club depictions of Red Sox shortstop - one from the past (Garciaparra) and the present (Bogaerts). In the end, it was the little details on Nomar's card - the spray of dirt near his shoe, the batting gloves in his back pocket - that made the difference. 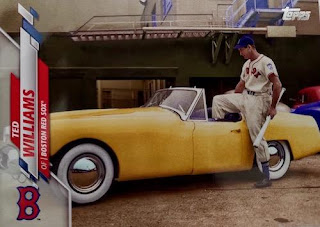 I'm guessing most collectors are like me when it comes to short prints - hates the concept, but accepts that Topps puts out some amazing ones. Every now and then, these base short prints (or in this case super short prints) are every bit as magnificent as their Stadium Club companions. Ted makes this car look insanely small by virtue of just stepping into it. 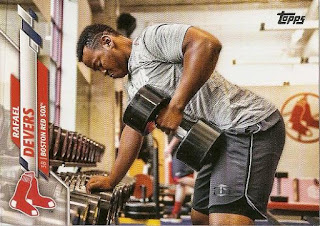 Another short print - but rather than go back to the days of old, we get a peek behind the scenes in a modern clubhouse. You see Devers on the field and you see his youthful face and fun demeanor. Then you look at this card and see the size of the weight he's pumping and see someone who is all business. 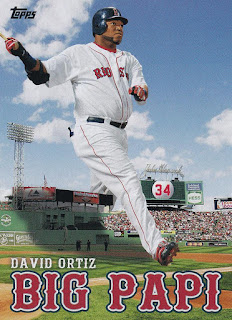 In my opinion, Archives hit a grand slam with this nicknames subset. These cards are creative and look fantastic. Ortiz is a larger than life personality, and this card captures that beautifully. I especially love the people on the field engulfed in his shadow. 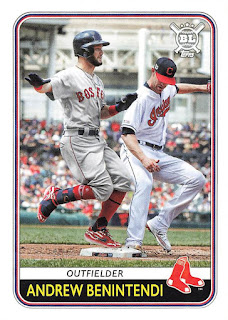 It's a great shot. You have two guys precariously close to colliding with each other, each with arms up and only one foot apiece on the ground. Baseball is a dance, and Benintendi's dance is called "Call me safe, Ump!" 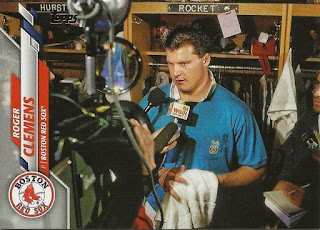 I try to get a wide representation of sets in this list, at least that's the hope. For whatever reason, these Topps short prints have really been fantastic this year, and this interview with the Rocket is my favorite. Roger's shirt screams the eighties, and if that's not enough you have the camera equipment, the locker name plates, even a guy on the side with a pen and notepad. 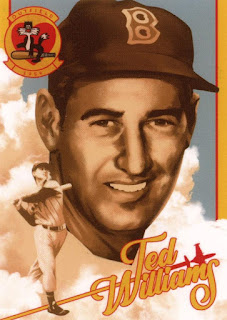 Last year, I pretty much dismissed Topps' online exclusives as pretty run-of-the-mill. Project 2020 would never be called that. There's a lot of cards in the set which, well, let's just say they don't fit my personal artistic tastes. Then there are cards like this, so amazing in design that you head to eBay and check out the prices. Does anyone know the story behind Sylvester the Cat riding a bat? I'm genuinely curious. 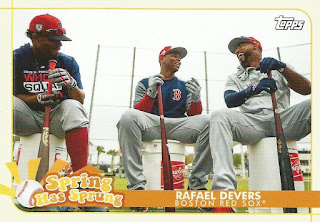 For the first time, an insert has cracked the list! This card wonderfully captures a candid Spring Training moment. Devers is joined by Xander Bogaerts and Eduardo Nunez in some conversation, and once again it's the details that make this card shine. Even millionaires have to sit on buckets sometimes! 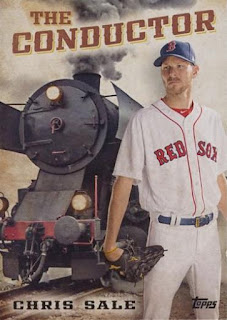 As I mentioned above with the Ortiz card, I love this subset that Archives put out. This card of Chris Sale is awesome. I love the old style locomotive in the background. Sale's nickname was given to him by none  other than "The Laser Show" Dustin Pedroia, because Sale "punches tickets". 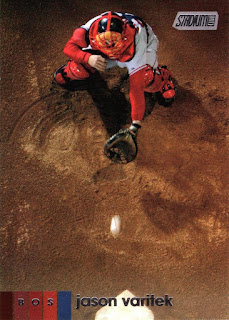 This is my favorite card. It's simple but powerful. If you told me that Topps took this photo from the pages of a Sport Illustrated magazine, I wouldn't be surprised. It the perfect card for a guy who wasn't a superstar, but quietly did his job day in and day out. This is a card of a professional ball player.
So which one is your favorite? Did I exclude one that should have made the list? let me know!
Posted by Matt at 10:00 AM 3 comments: 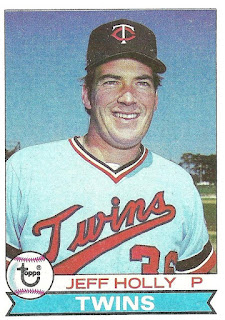 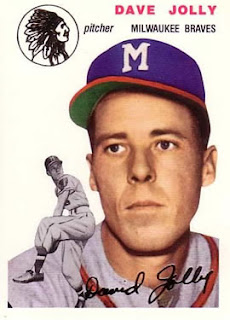 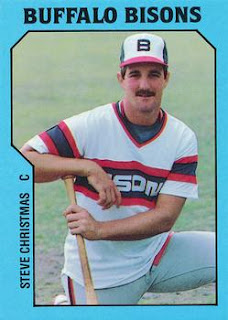 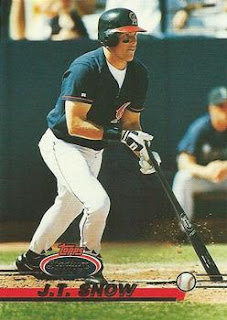 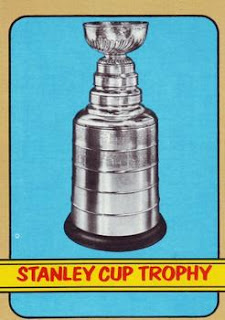 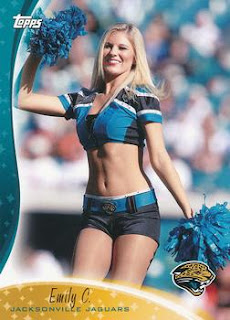 Merry Christmas to all of you out in blogger-land! May your stockings be filled with cardboard!
Posted by Matt at 10:00 AM 9 comments:

Thrown out at home on
Inside-the-park-home-run try
By young Barry Bonds
In one of baseball's crazier games, Ford helped the Phillies overcome a 10 run deficit to defeat the Pirates. The details from this insane game can be found here: https://mattveasey.com/2020/06/25/a-1989-philadelphia-phillies-supernatural-comeback/. It's worth a read, and what happens to Pirates announcer Jim Rooker is hilarious!
Posted by Matt at 10:00 AM 1 comment:

Sometimes I just can't help it. Admittedly, it makes me feel self-conscious, wondering if anybody has noticed how often I've done it. I even tell myself I shouldn't do it so much, and I should ease up a bit. But let me tell you, it just feels so good to pick at A Crack....ed Bat's Pickpockets Page!
A Cracked Bat is of course, the delightful blog by Julie. She is among the most generous bloggers out there, and has a whole page devoted to giving away cards. I've taken advantage of her generosity before, and recently she had some fantastic cards to give away which I just couldn't resist. Red Sox, oddballs, Hall of Famers - they were all there ripe for the taking! I picked up a page's worth of assorted goodness: 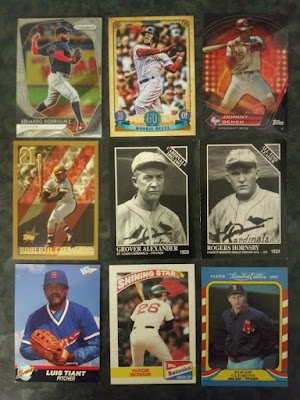 I also managed to pick a few cards courtesy of Bo from Baseball Cards Come To Life. He won a huge contest over at, you guessed it, A Cracked Bat! Julie sent Bo a ton of cards, and Bo proceeded to spread his good fortune to everyone else. I was more than happy to take a couple of chewy granola Hall of Famers: 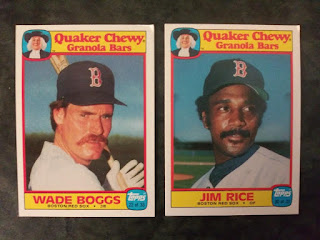 Favorite Card: Even though I never got to watch him play, I have a fondness for Louis Tiant. That Senior League card is fantastic, and I bet he could still throw a few fastballs if he wanted to.
Thanks for the cards Julie and Bo!
Posted by Matt at 10:00 AM 4 comments: 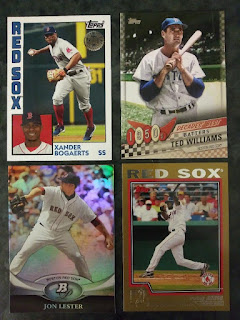 Favorite Card: Topps did a great job with their Decade's Best design, and that Ted Williams is a beautiful example of it!
Thanks for the trade Anthony!
Posted by Matt at 10:00 AM 5 comments:

Along with bro Cal
One of four sibling teammates
At second and short
When the Orioles called up Billy and started him at second base, he and his brother became only the forth pair of brothers to play the middle infield positions in a MLB game. (The others: Garvin and Granny Hamner, Eddie and Johnny O'Brien, and Frank and Milt Bolling.)
Posted by Matt at 10:00 AM 4 comments:

I'm on a bit of a roll. For whatever reason , Time Travel Trades have been plentiful recently. I have a record 6 more to show off today. Including two swaps I made with myself, that makes 17 trades in the past 4 months! That's crazy, but a good crazy! There's a lot to show off today, so let's jump right in!
Trade #1: The first trade comes from Tom of The Angel In Order. Tom collects checklists, and snagged a couple I showed off last month. Tom sent a couple nice Phillies as a return package:

Trade #2: Next trade comes via the TCDB, courtesy of a member named Abraham. A trio of late 70's/early 80's cards went his way, and this trio came back:

Trade #3: Another TCDB member named Sky snagged a 1964 Topps card, and offered me a choice of 1958 Topps cards in return. I went with a great shot of  a catcher throwing down signs:


Trade #4: Juan Marichal and a couple of vintage football cards were in the targets sight of TCDB member Edward. I actually made two trades with Edward - a more modern card swap occurred, which I'll show off down the road in another post. For now, here's the great cards I have to add to the Trade Stack:
Trade #5: Chris from the blogs The Collector and The 1993 found a 1969 Jim Wynn to his liking, and generously sent some fantastic trade fodder in return:
Edit: Chris sent a second envelope with even more cards for the Time Travel Trading Stack, but I didn't get a chance to include them here. At least you're garaunteed to see some new cards next update!

Trade #6: Last but certainly not least, my "Patron Saint Of Time Travel Trading", Bo from Baseball Cards Come To Life! decided to give a lot of vintage football cards a good home. Bo always sends a great return package, and this time was no exception:


Over 20 new cards have arrived in the stack, something for everyone! Thanks to all these amazing trade partners! If you want in on the fun, just let me know here or via the TCDB (Kep75). All you have to do is send me an older card than what you want in return!