Another 2 weeks have gone by without a trade proposal. That makes one trade in the past 9 weeks. At some point I'll have to officially end the Time Travel Trading Project, and although I don't think that time is now, it does appear to be in the near future. Maybe I'll go to the end of the year, maybe when the 2019 Topps set comes out, I don't know. For now, I'll continue to pimp cards and hopefully entice a few more trades out of this. Today I'm going to feature that last 2 cards I received in February. 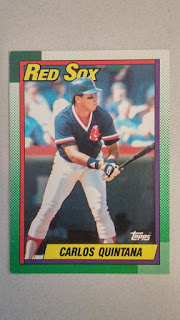 Another Red Sox card on the block! I swear I'm not doing it on purpose, I just seem to get a lot of Red Sox cards in trades. (I wonder why....). Anyway, he'll end up in my doubles box if no one rescues him!

How Acquired - Received from a Chris from Nachos Grande along with a 2013 Topps Update Stephen Drew and 1971 Topps Hal McRae in exchange for the 2018 Topps Eric Hosmer.

Why Should You Want These Cards? - The colorful 1990 Topps set is very underrated in my humble opinion. It's a nice looking set. Quintana was one of those types of players that arrived on the scene without much fanfare but was a steady producer once he hit the Majors. Unfortunately, he was never the same after a car accident wiped out his entire season in 1992. 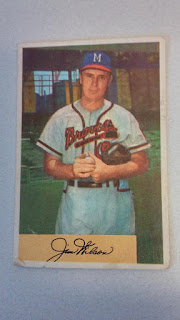 This card officially made my project an unqualified success. I never would have dreamed I'd be able to get anything this old from the original pack. Since then I've acquired another 1954 Bowman plus two cards even older.

How Acquired - Received from a TCDB member in exchange for a 2018 Topps Derek Jeter Highlights black parallel insert.

Why Should You Want This Card? - It's been said before: Jim Wilson is a badass! From the back of his card: "In 1945 Jim suffered a severe injury which looked like the end of his baseball career. He was pitching for the Boston Red Sox against Detroit at Briggs Stadium. Hank Greenberg was at bat and hit a line drive which struck Jim in the head. He was knocked out and carried from the field. He had a delicate brain operation and was warned by his surgeon to give up the game. He decided to try again, and he had a 12-6 record for Louisville in 1946."

I need your help to keep this project going! make me an offer!