I've been doing these posts biweekly. Usually when I do a Time Travel Trading Post, any trades I get offered will come in within the first week. After that, and I can assume no one is going to contact me. This has worked out well for me, as it gives me time to prepare the next post. I can usually get the next post written up and scheduled well ahead of when it's due. That was the case this past week, and of course, I get an email on Thanksgiving proposing a trade! So I had to quickly revise this post, not that I'm complaining! Yes, a trade is in the works! I should have a new card (and a new story) by the next update!

Until then, I'll pimp some more cards. No one took advantage of the last two cards on the chopping block, so into my collection they go! Now, I've been pimping these cards in chronological order, meaning the ones that have been here the longest are the ones I put up. If I continue that route, the Glen Rice rookie card would be next. However, I don't collect basketball cards, so I have no motivation to put him into my collection. He'll stay in the stack until the bitter end, unless someone wants to throw some late 80's junk wax my way for him (hint, hint). 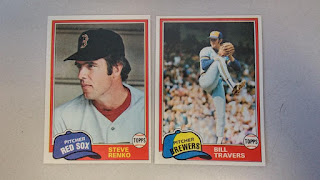 How Acquired - Received back in March from a TCDB member in exchange for  a 2018 Topps Francisco Mejia.

Why Should You Want This Card? - For starters, they're 1981 Topps - one of the most recognizable sets outs there! Secondly, hw can anyone not love Steve's sideburns or Bill's powder blue Brewers uniform? Finally, I'm making this a two-for one special! You have both cards for any one card older than they are, in any condition! Heck, I'll even throw in the Glen Rice card if you want, making this a 3 for one deal!

The stack is shrinking! It's whittling away into nothingness! Make me an offer on any of the cards below! This project can't survive without your help!