Xander Bogaerts couldn't believe what he saw as he entered the room. Ornate display cases completely covered three full walls from floor to ceiling. Inside, the displays were filled with all sorts of baseball memorabilia. It was well known in the Red Sox clubhouse that Nomar had an impressive collection, but until he saw it with his own eyes he couldn't fathom how extensive it was.

"What do you think?" Nomar asked with a hint of pride. Xander paused, taking in a picture of Nomar with the great Ted Williams, before answering. "It's incredible. I feel like I'm at the Hall of Fame."

"Here, let me show you my latest acquisition." With a casual flip, Nomar tossed a ball into Xander's waiting hands. A baseball - old, dirty, easily a hundred years old. The weight and feel of it was different then what was used today, but in his hands it felt as familiar as anything. Slowly, almost reverently, he turned the ball until he could see the writing: "To Nomar - Best wishes, Babe Ruth." Wow, a baseball autographed by the legendary Babe Ruth! That must have set Nomar back a.... The thought trailed off in Xander's mind as he looked at the inscription again. "To Nomar." Was this a prank? Perhaps Nomar was having fun at his expense. The writing had to have been forged, but still, the age of the ball was undeniable. He doubted Nomar would deface such a treasure for the sake of a joke.

"How is this possible? Babe Ruth died about 80 years ago himself? Where did you get this?" A sly smile formed on Nomar's face. "Would you believe I actually met him? I have some very powerful friends who've built a working time machine, and this ball is proof it works. Unfortunately, their funding has been cut, and so I've been helping solicit donations. Interested?"

Xander peered at the ball again, then gazed around at all the vintage artifacts on display.

Some fresh cardboard was enough to entice two new trades, both courtesy of the TCDB! First off is a 2-for-1 from a collector named Dan. I don't think this was initially intended to be a Time Travel Trade, just a regular one. However, it met my prerequisites, so into the stack are a couple of Red Sox shortstops from last year's set: 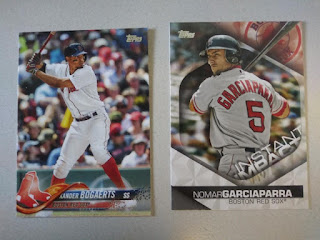 Not bad for the 30th Time Travel Trade, if I do say so myself!

Next up are some cards from a TCDB member named Garrett. I sent three cards his way, and he sent these 4 back: 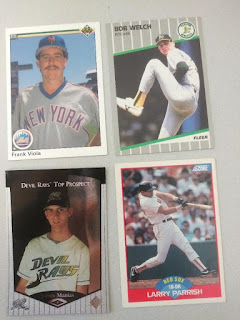 A couple of former Cy Young winners highlight this group of cards. I know, you may look at 1989 Fleer and think "junk wax", but I prefer to think of it as "Holy crap these cards are 30 years old!"

These new additions, plus all the rest here, are waiting for some brave soul to take them into their collection. I still have most of the new 2019 pack available too. All I'm looking for is an older card in return, whether it's a year prior like Dan's cards or "Holy crap these cards are 30 years old" like Garrett's! Make me an offer!