A "Bear"-y Lucky Guess Leads To A Complete Set

I'm horrible at guessing games. It doesn't matter if it's jelly beans in a jar or the Mega Million lottery, chances are I'm not going to win. That doesn't stop me from trying now and then.

Adam of the blog ARPSmith's Sportscard Obsession recently held a contest where lucky guessers can win one of 4 prizes by trying to guess various details from his recent online purchase. To be honest, I almost missed entering. I read the initial post, with every intention of entering, but filed it away in the back of my mind and continued with my morning blog reading. Many days later, I remembered it and threw out some guesses. I ended up be the last entrant.

I won the last of four contests! I correctly guessed the brand that represented the bulk of his SF Giants card acquisitions! (Chrome, if you were curious). I also was one off from the total number of USC Trojan hits he purchased, but as I had already one a contest, I was ineligible for the second.

My prize was my choice from a list of junk wax era complete sets:

Since I don't collect football, those were easy to dismiss. Once I accounted for the baseball sets I already had complete, or was very close to completing, I had it narrowed down to 6 sets:

In the end, I went with the set I had the fewest cards of - Fleer 1987 (44 cards). It didn't hurt that this set contains rookie cards for Barry Larkin, Barry Bonds, and Bo Jackson either!

When the box arrived I was greeted with an unexpected surprise: 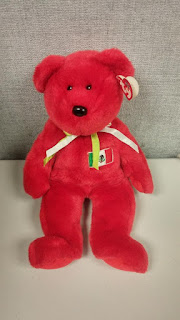 This cute bear, Adam's choice of packing material as it were, is currently being shared by my two daughters. 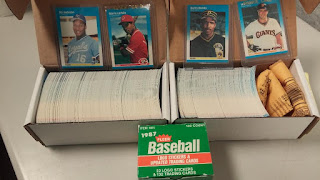 Adam was also kind enough to throw in an almost complete set of 1987 Fleer Update as well. It's only missing the Mark McGwire and Greg Maddux rookie cards. (My So Close! page has been properly updated of course!)

Thanks again for the cards, Adam!
Posted by Matt at 10:00 AM