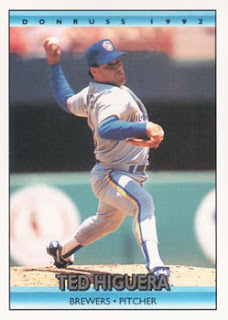 If someone were to ask you who was the MLB's best pitcher in 1986, you'd probably say it was Cy Young and MVP award winner Roger Clemens. However, Higuera finished that season with a higher WAR! That season was one for the ages as Higuera earned his only All-Star selection en route to becoming the first Mexican to win 20 games. He one of the many tales of a pitcher with Hall of Fame talent derailed by injuries.

Looking at the list of Brewers in the 1992 Donruss set, I think I have a connection.


It helps to find players who have either had long careers and played on numerous teams. Paul Molitor definitely qualifies here. Among those teams, I recall him having a stint with the Twins.


David Ortiz was just starting out as Molitor's career was winding down. These Twins can claim to have two of the greatest designated hitters in history on the same team!


David Ortiz is probably the one former teammate Mookie has had that can claim to have been playing in the 1900's - if I can connect a card to Big Papi, that'll make my job a lot easier!