Earlier this year, I announced a side project I was planning to casually pursue: In honor of the Red Sox World Series title last year, I wanted to collect all of the gold Red Sox parallels from the 2018 Topps base and update sets.

The key word is casually. It's not a high priority project, and I haven't been putting much effort into it. I acquired one card earlier this year, but that's been it so far.

To keep a project alive, I feel I really need to make some progress every now and then. I decided to do a little hunting on the Trading Card Database and see if anyone had any golden Red Sox on their trade list. I found one trader that not only had a gold Christian Vazquez available, but also had a gold parallel I owned on their want list!

Next thing you know, I'm sending out a 2019 gold parallel of fellow catcher Yadier Molina to Olney IL. One-for-one swaps don't get much easier than that! 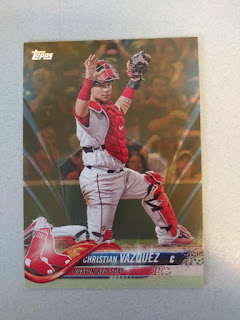 Christian Vazquez becomes the second card in my Golden Sox project, and the first player to actually play in that memorable postseason. His solo home run in game 4 of the ALDS turned out to be the difference maker as the Red Sox held on to beat the Yankees 4-3 in that game. Vazquez played in 4 of the 5 World Series games, going 3-15 with 1 run scored. In that epic 18 inning Game 3, Vazquez caught 11 innings, then moved to first base (for the first time in his Major League career) for the final 7innings!

2 down, 29 to go! If anyone has any they are willing to trade, let me know! You can check out this list on my Golden Sox Project page!
Posted by Matt at 10:00 AM