Trapped In Time: Remnants Of The 14th Trade

Welcome to what I'm planning on being a new monthly installment to my Time Travel Trading project! As I mentioned last month, the trade stack is getting long, and I decided the time has come to cull some of the more tenured cards from the trade stack. If no one has claimed them in the 4 years they've been here, then the chances of them ever being traded are slim.
I keep a pretty detailed record of the trades I've done for this project. In fact, I have a whole unpublished page on this blog listing every card ever added and traded away. In going through these records, I found two cards that have been in my trade box the longest. Let's revisit this trade, look at these cards, and give them one last shot at being wanted before I decide what I want to do with them. If no one offers a trade before next's month's Time Travel Trade update, I'll retire them...maybe...more on that in a bit.
Trade #14 Gary (TCDB)
Traded 04/07/18:
Received 04/16/18:


This trade was straight up generosity. In exchange for one card, I got 13 back, all vintage. When a card gets traded away, I italicize it and notate the trade number. As you can see, 11 of these cards are in the appreciative hands of other collectors. However, two cards have remained. It stands to reason that the older the card, the less likely someone out there reading my blog not only wants the card, but has an older card they're willing to give up. This is especially true with cards I have from the 50's and older. It's tough to match up on a trade, especially if the other collector has preferences with the card's condition. 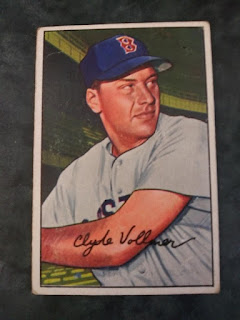 Prime example #1 - Not many people have a card older than 1952 hanging around in their doubles box. Fortunately, Mr. Vollmer's fate will be a positive one regardless. As a Red Sox fan, I will happily add him to my personal collection, where he will immediately become the oldest Red Sox card I possess. (Not to dissuade anyone from making a claim for him - I've traded away many great Red Sox cards for this project!) 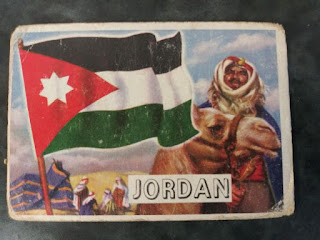 When I first got this card, I thought it was pretty cool. I especially liked how the back taught you how to say a few words in the country's language. I though someone might want it, but here it has remained. It's hard enough trading away cards from the 50's, but it adds an extra layer of difficulty when the card isn't a traditional sports card.That's what makes this card's fate a complex one. I'm still not quite sure what to do with it. I hopped on the TCDB and found a few people with this card on their want list, but the members either were not active or did not have anything older on their For Trade list. In fact, the only real option was a collector who had another card from the exact same set available to trade - the move wouldn't really do anything for the project. I could add this card to my collection as well, but to be honest, it doesn't fit. It would get stored away and forgotten - a cardboard equivalent of the Ark Of The Covenant. So what should I do? That's where you come in - I'm opening this up for a vote. Here's what I believe are the options:
So bottom line, this could be your last chance to acquire these cards! If nothing else, let me know in the comments what you think I should do with that Flags Of The World card!
Posted by Matt at 10:00 AM