It's been awhile since I last made any progress on my little side project to obtain the gold parallels of all the 2018 Topps and Topps Update Boston Red Sox. I had an opportunity to remedy that recently with another TCDB trade with a guy named Brian. Thanks to him, Drew Pomeranz can be checked off the list: 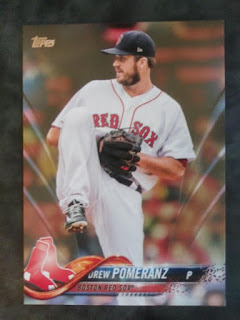 Pomeranz will forever have a place in Red Sox history as one of the strangest trades ever. Pomeranz was an All-Star for the Padres in 2016. It was during that All-Star break that he was traded to the Red Sox in a straight one-for-one trade involving Boston's top pitching prospect Anderson Espinoza. Later that season, it came to light that the Padres were keeping two sets of health records - an internal one within the organization and a modified one they shared with other teams during trade discussions! The MLB eventually suspended Padres GM AJ Preller for 30 days, and the Red Sox declined an opportunity to have this trade rescinded.
Pomeranz did not appear for the Red Sox during the 2018 postseason. He had a down year with injuries and ineffectiveness, and was left off the postseason roster during the ALDS and ALCS. He was a surprise addition to the World Series roster, but never made it into a game.
Pomeranz is the 6th addition to the Golden Sox Project, with #7 to be featured soon!
Thanks for the trade Brian!
Posted by Matt at 10:00 AM