I found Stadium Club! Granted, well after everyone else, but who cares! There were actually cards...at Wal-Mart...that I wanted to buy! Good grief I feel like I found a twenty on the sidewalk or something.

Anyway, now that I can actually hold these cards in hand, I can sift through and give my impressions. 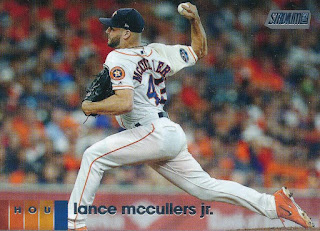 The honorary first card goes to the son of Lance McCullers. Stadium Club dares to show a hint of color design-wise with their little rainbow of litmus strips. I'm not a huge fan of the abbreviated team names and all lowercase player names, but with Stadium Club you expect beautiful full photography with minimal design elements. You still get that here so it's all good.
#118 Jacob deGrom 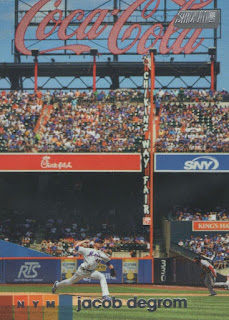 *squints* Oh, there he is! I found deGrom! I'm pretty sure Waldo is in the stands there somewhere too. Are we sure this isn't just a advertisement for Chick-Fil-A and Coca Cola?
#186 Austin Nola (RC)
#236 Alex Bregman
#85 Kyle Hendricks 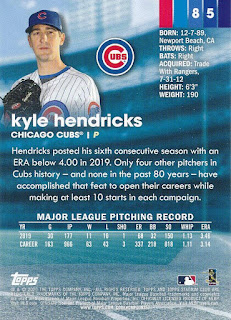 This looks like a good spot to look at the back. Once again, a fairly typical Stadium Club back - head shot, short write-up, brief stats - all nicely displayed against a soft but decorative background.
#6 Abraham Toro (RC)
#168 Ryne Sandberg 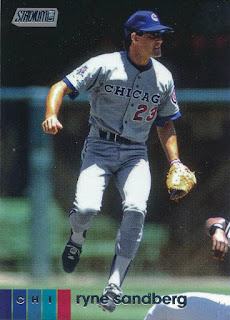 Once again, Stadium Club includes retired greats from years past. Here we have Sandberg floating in the air, much to the terror of some poor soul beneath him.
#PZ-19 Kris Bryant (Power Zone insert) 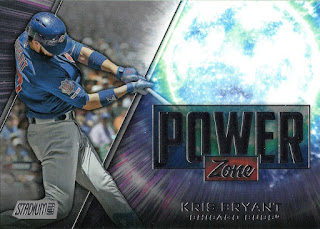 We come across the first insert of the pack, Power Zone featuring Kris Bryant. If there's a criticism to Stadium Club's wonderful photography, it's that it makes the set's graphically heavy insert sets really look like they don't belong. It's a nice looking card, don't get me wrong, it just doesn't fit that Stadium Club "brand".
#165 Stephen Strasburg (Members Only parallel) 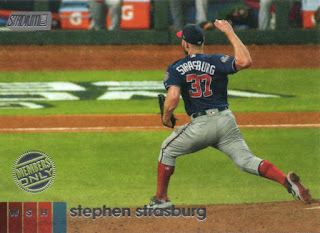 My other non-base card of the pack is from the Member's Only parallel set. As far as stamped parallel sets go, this isn't all that exciting. Yawn.

#262 Zac Gallen (RC)
#210 Eduardo Escobar
#174 Gio Urshela
All in all, this pack was kind of a let down. I didn't seem to get any of the "Wow" cards that Stadium Club is famous for. I know they're there. I've seen them! I just didn't pull any this go-around. Still, Stadium Club remains one of the best sets of the year, and maybe, just maybe, I'll be lucky enough to grab a few more next time I'm in Wal-Mart.
Posted by Matt at 10:00 AM