Rod from Padrographs was cleaning out some stuff again, and offered it up to his viewers. Lots of amazing stuff, but there was one item I focused on - The 1992 Manning 1919 Black Sox reprint set. I had seen this set before on other blogs, and thought it was a great-looking set aimed at one of the darkest moments in the sports history. I put my claim in and a short while later it was in my mailbox! 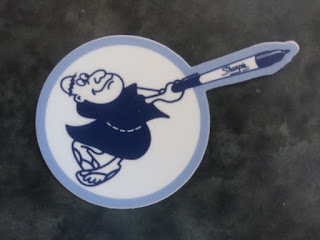 First of all, I have to give Rod kudos for this clever logo. I couldn't think of a better way to sum up his love for autographs and the Padres! 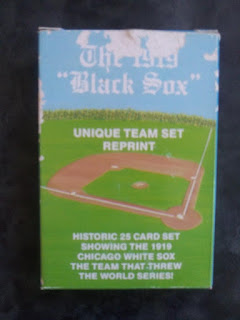 Here's the box - a bit of wear and tear, but still in overall good shape. Notice how it says it's a 25 card set? That's not entirely accurate... 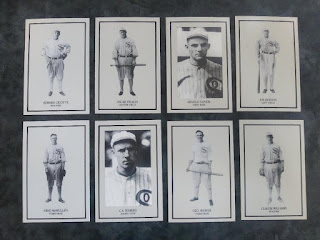 Here's the condemned 8 players who where thrown out of baseball, signified by the black border around their cards. Personally, I'm in the camp that believes that Shoeless Joe's lifetime ban should have ended when his lifetime did. Whether or not he belongs in the Hall of Fame is another issue, but his accomplishments deserve to be debated. 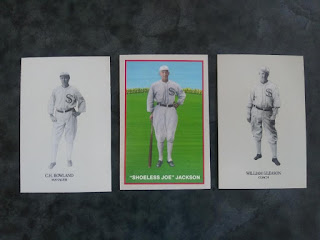 Another card of Jackson, this time in color, accompanied by the team's manager and coach. I'm not up on my history, but did teams back then only have one coach? If there were others, why is William Gleason the only one appearing in the set? 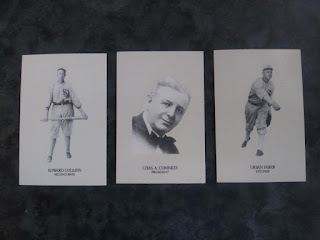 Here's something Altuve and Verlander fans cans take hope from: Despite the 1919 World Series scandal, the White Sox still managed to produce 4 Hall of Famers in this set - In addition to club president Charles Cominsky, the team had Eddie Collins, Urban Faber, and Ray Schalk....
Wait a sec..where's Ray Schalk? I counted the cards, and there's 25 of them, just like the box says. According to TCDB, there's actually 26 cards in this set! Maybe the colorized Jackson was some bonus card. I don't know. All I know is that Mr. Schalk is now the latest addition on my "So Close!" page. 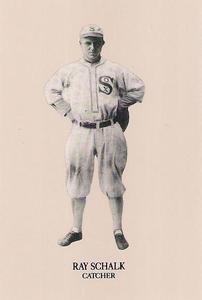 Thanks for the cards, Rod! This set is amazing!
Posted by Matt at 10:00 AM