The Mysteries Of Area 40

In my short blogging career, there have emerged certain "Legends" of the blogging/collecting community. One name that shows up frequently is Wes Moore, once of the Jay Barker Fan blog. His packages to other bloggers are always required reading. Wes is now running Area 40, chronicling his grandiose departure from the collecting scene by hoarding boxes upon boxes of sweet cardboard.

I've followed Wes's blogs for awhile, commenting every now and then, but never really establishing a trade relationship with him. I never thought I'd ever be on the receiving end of one of his famous mailings.

As part of his grand finale, he's been showing off the boxes he's acquired and holding regular contests along the way. I won one of his contests! The prize? I didn't know! It was a prize of mystery, and as he put it: "I do mystery well." 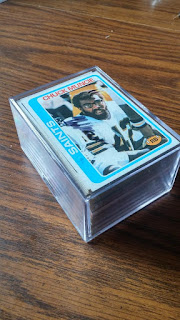 The visage of a bespectacled Saint greeted me. What wonders lie within? To quote Brad Pitt: "What's in the box?" No severed heads, but plenty of heads on cardboard! The prize was a nice mixture of baseball cards and vintage football!


I'm not a football card collector, so I had to do some research on these. The highlight here would have to be the 1958 Joe Schmidt and the rookie card of HOF kicker Ray Guy. Topps really had some great designs in the past, didn't they?

Wes didn't stop at just football, however. I got a nice stack of baseball cards too!


Those '75 Phils are great, especially the Mike Schmidt! If Craig Kimbrel ever makes the Hall of Fame, I'll have a rookie of his!

The real highlight from the baseball cards was an easy choice! Among all this goodness was this Red Sox card: 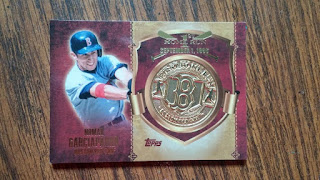 Nomar Medallion for the win!

Thanks for the cards Wes! You truly do mystery well and I wish you nothing but the best of luck with your Area 40 project!