October must be my favorite month. I got married in October. I enjoy the cooler temperatures, the colorful leaves on the trees, the crispness of the air. October is a big month for my two favorite sports as well: The MLB playoffs start on Tuesday (Go Red Sox!) and the NHL season kicks off the next day (Go Sabres!) It is with this start to a new hockey season that I felt it was appropriate to wrap up the series showcasing all the hockey cards I've gotten from Billy at Cardboard History. I've milked this bounty of cards for all it was worth, and judging from the stats available from Blogger, it was a good decision:


That's right, Billy's gift of hockey has represented the 3 most viewed blog posts all-time on my blog! So, not only do I need to thank Billy for the cards, but for the extra traffic to my site as well! 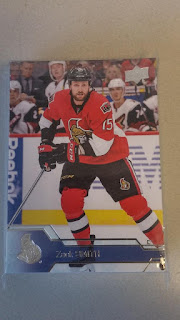 It's time to show off the final pack. This pack contained 33 cards, mostly from the Upper Deck 2017-18 set, with a few other recent cards mixed in. As always, I'll highlight my favorites!


The old-school uniform, the awesome helmet, the stoic look on Tukka's face - this card is just bad-ass! I can't imagine any hockey player not feeling a little intimidated having to face that net-minder!


It amazes me what can be done with photography nowadays. This is an incredible ice-level shot where Nash just towers over you.


My first Golden Knight card! I'm eager to see what this team does for an encore!


Ice sprays are like the clouds of dust on a baseball card. They give just a cool reflection of action!

So when I first got this box of cards last Spring, I noted how few hockey cards I truly had, and made a point to chronicle how much my hockey card collection changed as a result. Let's see the results!


Upper Deck may not have the monopoly on hockey that Topps does on baseball, but they are the undisputed kings of the mountain. It's good to have some more set variety now. I had never even heard of the In The Game brand before this!


My favorite team on top by a wide margin - just as it should be! (Ironically, I now have exactly as many Sabres cards as I had total cards before this all happened!) Washington and Detroit are the only two teams that ranked atop the first list to survive and make the second list.

Once again, Upper Deck reigns supreme, only now there's a lot more company to fill the list out.

Billy, once again, I can't you for the generous prize. You're awesome!