Someday, I'm going to have to wind things down and put an end to the Time Travel Trading experiment. Cards are only valuable for trade if someone else wants them. My last update failed to generate any new trades, so it's back to pimping what is already here! Like before, I've selected some cards that have sat in the stack for awhile. If no one wants them, I'll pull them from the stack and add them to my collection for good. This is your last chance to acquire any of these cards. (At least, as far as this experiment goes - I'll always entertain offers!)

I'll start out with some cards from the first Time Travel Trade I ever made: 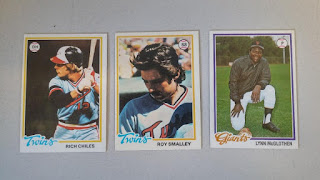 I'll be honest, I don't want to pull these guys from the stack. I already have them, so they would go straight into my doubles box! I'd rather give these guys to someone who could genuinely use them. Could that be you?

How Acquired - Received from a TCDB member along with a 1979 Topps Bill Lee in exchange for 4 cards from the original 2018 Topps pack (Ian Kennedy, Garrett Richards, Julio Urias, and Justin Smoak).

Why Should You Want These Cards? - They're 40 years old, that technically makes them vintage! Roy Smalley is the nephew of well known former manager Gene Mauch, and his last Major League appearance was Game 7 of  the 1987 World Series with the Twins. Lynne McGlothen was a former All-Star, and Chiles...well Chiles career wasn't very memorable, but according to Wikipedia, he lives in Yolo County. YOLO! Not enough of an enticement? How about a 3-for-1 deal? I'd be willing to give someone all three of these cards for a single older card, even if it's just some bench guy from 1977. 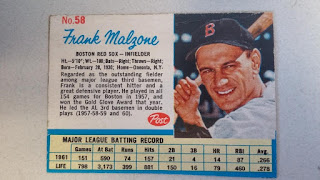 The Malzone oddball has also been in the stack since February. I said it then and I'll say it now. If I end up keeping this one, I won't exactly be upset about it. Still, in the interest of keeping the Time Travel Trading program running, I wouldn't be upset if someone made an offer either.

How Acquired - Received from a TCDB member along with a 1964 Topps Jack Lamabe and a 1956 Topps Davy Crockett card in exchange for a 2018 Topps Justin Turner 1983 insert.

Why Should You Want This Card? - It's a vintage oddball card! Malzone was no slouch either - an 8 time All-Star, and winner of the very first AL Gold Glove at 3rd base!

Help me keep this going for awhile longer! I need your help to keep cards circulating in the stack. I have something for everyone!

The rules haven't changed: Everything in the stack is awaiting a trade, and all I ask in return is a card older than what I'm sending you. Make me an offer, either through this post or on the TCDB (Member Name: Kep75).