I've got a trade percolating for the three 1978 cards from the last update. So for now, they get a stay of execution. The Frank Malzone generated no interest, which is fine by me. It'll make a nice addition to my personal collection.

In the meantime, I'm going to pimp out some more cards! I'm still going through cards that have been here since February. Ironically, if I continue to go chronologically, more 1978 Topps and another Red Sox vintage hit the chop block again. It's another Last Chance Showcase! 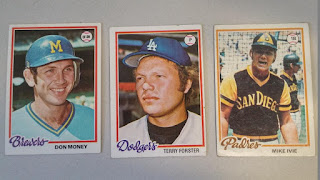 Just like the last batch from this set, they would all be doubles in my collection. I rather trade them off and keep this project going. If a 2-for-1 or 3-for-1 deal will get that done, then I'm listening!

How Acquired - Received from Billy (Cardboard History) in exchange for the 2018 Topps Cleveland Indians team card.

Why Should You Want These Cards? - It seems fitting that we have a Brewers card and a Dodgers card in this stack. Money was even a member of the Brewers' lone World Series team in 1982! Forster also got his ring, for the 1981 Champion Dodgers. Mike Ivie was a former #1 overall draft pick in 1970. 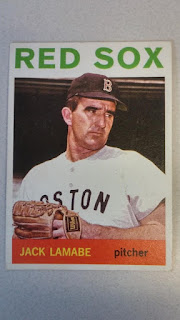 Another Red Sox vintage that would find a happy home in my collection if it doesn't get traded for soon. I'm cool with it either way.

How Acquired - Received from a TCDB member along with a 1962 Post Cereal Frank Malzone and a 1956 Topps Davy Crockett card in exchange for  a 2018 Topps Justin Turner 1983 insert.

Why Should You Want This Card? - He played for 3 teams in 1967, and the last team he joined (Cardinals) ended up winning the World Series. He was the first full-time head baseball coach in the history of the LSU baseball program.


These cards will disappear from the trade stack if no one claims them! All it takes is an older card in return. help me keep this going!