This one hurts. Not that any of the others didn't, each spectacular life was one worth celebrating. But none of the recent string of deaths among the legends of baseball had the sheer impact as the immortal Henry Aaron. He was one of the true giants of the game, an automatic inclusion on the Mount Rushmore of the greatest of the great. His story transcended the game itself, captivating even non-baseball fans. There will never be another Hank Aaron.
As it were, today is also his birthday. In honor of his passing, I once again present the top 5 favorite cards in my collection: 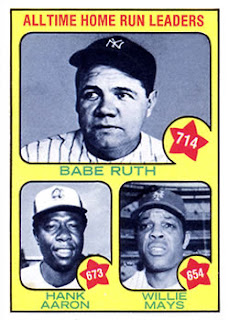 I was born in 1975, years after Aaron became the all-time home run king. Growing up, he was always the #1 name, and it was weird to think of a time when he wasn't. Did kids in 1973 look at this card and realize that "Hamerrin' Hank"  still had 82 more home runs in him? 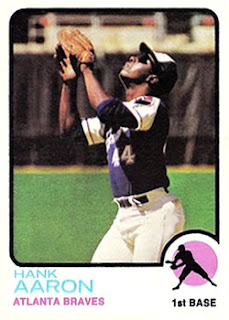 The only playing days card of just Aaron in my collection. Few people mention that he was a pretty good fielder too, winning 3 Gold Gloves as an outfielder. 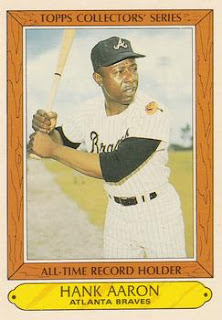 We all know of the home run record, and many still view him as the legitimate home run king, but Aaron holds many other MLB records as well, with 2,297 RBI and 6,856 Total Bases (over 700 bases more than the next player, Stan Musial!) 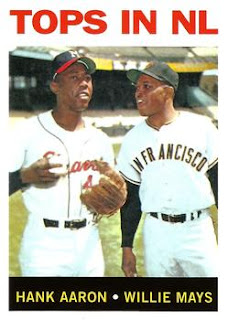 Maybe someday I might possess this beauty from 1964, but for now this reprint will do just fine, featuring two iconic ballplayers. I read somewhere that with all these recent deaths, Mays is now the oldest living Hall of Famer. I hope he's doing well, I don't think anyone can handle it if something happened to him too. 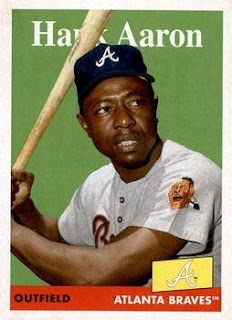 We'll finish with this simple but wonderful offering from a recent Archives set. This is likely a posed shot, but I can't shake that determined look in his eyes. He's looking to hit a ball, and hit it far.
Rest In Peace, Mr. Aaron, and thank you.
Posted by Matt at 10:00 AM