Kindness From Tom and Chris

Between my Covid-produced backlog of posts and my unexplainable need to pay tribute to every departed Hall of Famer, I'm really falling behind when it comes to showing off cards I've received. Case in point: before the holidays I received two separate unexpected PWEs from some of my fellow bloggers.
Tom from The Angels In Order recently found a 1987 Glossy All-Star he had set aside for me, and sent that off along with a few needs from my 1981 Topps build. Unfortunately, I have completed the Glossy All-Stars insert set, so the Gooden is a double. I'll have to keep my eyes open for an opportunity to pay it forward! Thanks again Tom! 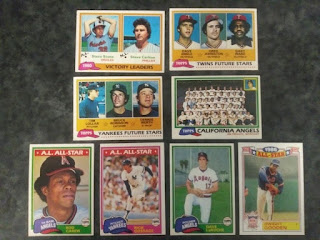 I mentioned in my last Time Travel Trading post that Chris from The Collector had sent some extra trade fodder for the project. He also included a couple of Red Sox cards for my personal collection. 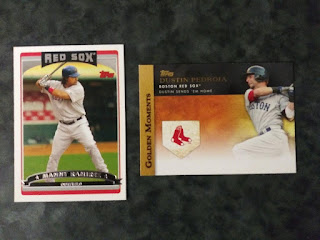 I have a gap in my collection from the late 90's to the early 2010's when I wasn't collecting, so that 2006 Manny helps me inch closer to at least obtaining the Red Sox from that era. Plus you can never go wrong with a Pedey! (I'm already trying to formulate the eventual retirement post for him..) Thanks again Chris!
Favorite Card: Manny being Manny. Even though he didn't last long, I'm hoping Australian League cards of him surface somewhere..
Posted by Matt at 10:00 AM