I won a lot of hockey cards from Billy at Cardboard History. Here's the 2nd pack I'm opening, which also features a Sabres player on top: 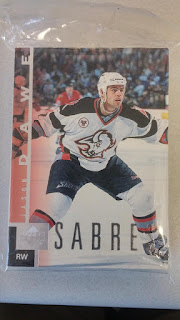 49 more cards added to the collection! Lots of good stuff here, way too much to show all of it. Allow me to showcase a few of my favorites!


Puppa's All Star Mullet would be a great rock band name....


It's not officially a hockey collection unless you have at least one card of The Great One!


Another Puppa - I love the effect Score used here!


Hall of Famer Pat La-la-la-laFontaine with some protective face gear. He had previously missed a few months after breaking his jaw.


So far, the oldest card is the treasure trove from Billy. That 1979-80 design is great!