One thing I've quickly discovered when I started reading card collecting blogs is that bloggers like to write a series of posts that tie together. I myself do this frequently. This past year, one of the biggest and best series has finally wrapped up. I am referring to the Sports Card Tour on The Collector's blog. Chris took the four major American sports and did a post for each city that had a team. He highlighted players and cards from his collection. It was an epic series, and it's amazing how much hard work was put into it. It was a great series, and if for some strange reason you haven't read it, it's definitely worth you perusal! (My favorites were obviously Buffalo and Boston!)

Once the series concluded, Chris held a giveaway. Those that commented on his blog posts were awarded participation points, and list of top commenters were given the opportunity to  select not one, but two prizes from a very generous list!

With my first pick, I predictably picked a box of Red Sox cards. Chris and I are both fans of this team, so I figured there would be some pretty good cards coming my way. 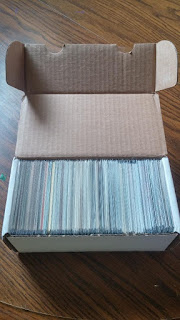 That's a lot of cards! I'll be honest, it's going to take me some time to go through this box, so this prize will likely end up as a separate post. But today, I'll show off my second pick.

I went with an unusual choice for prize number two, at least unusual for me. My curiosity was peeked at this 2007 Topps Heritage Team Emblem box topper: 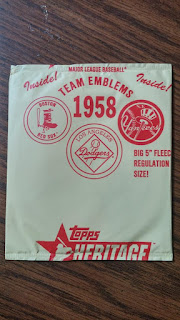 This was just a cool little oddball item to add to my collection, and there were some great team logos back in 1958. So which one did I get? 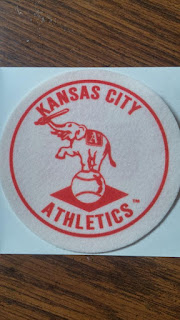 Neat! The Athletics' elephant from their days in Kansas City! This is a good looking patch!

The mailer containing the patch also contained some cards. I'm guessing a bit of overflow from that box I also got: 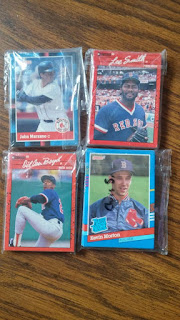 One thing I wondered as I was claiming the first prize: Since we're both Red Sox fans, how many Red Sox cards that he has doubles of will be new to me? I decided I would keep a tally of which incoming cards would be needs and which would be extras. From the above picture, you can see these cards are mainly junk-wax era Donruss. That was right in my collecting wheelhouse as a teen, so I'm guessing I'll have most if not all of these. Anything in that box from the late 90's up through the past few years however, would fall in that time period when I wasn't actively collecting. There's a good chance I'll get some fresh cards from that era. I'm guessing once I go through the box it'll be close to a 50/50 split.

Among the lot shown above there were 4 that I actually needed! 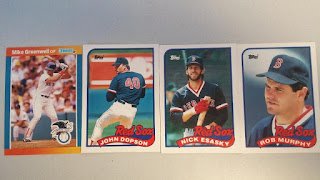 I'm not used to seeing a clean-shaven Greenwell, and the other three are from the 1989 Topps Traded set. There were 81 cards total, so this batch netted me 5% new cards. Not a bad way to start!

Thanks again Chris! I'm going to really enjoy going through the rest of these cards!
Posted by Matt at 10:00 AM