I'm playing catch-up today. I have a couple of trades that were completed earlier this summer to show off.

First, Eric from Old Red Sox Cards and I swapped some Red Sox cards. He asked for a Dustin Pedroia I had acquired last winter, while I left it completely up to him as far as a return goes. I guess he felt guilty taking a few months to complete the trade, because he ended up sending me this: 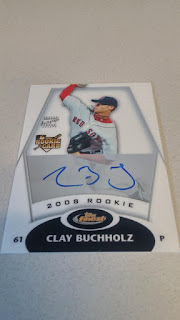 "Accrued Interest " as he put it! A beaut of a card, but Clay, my man, that has got to be one of the all-time worst signatures in baseball! I wouldn't have been able to place those lines without context if my life depended on it.

Next Tom from The Angels, In Order offered up a trade for some well-loved vintage checklists I had recently won. Tom took a peek at my So Close! page and found some good stuff to send me: 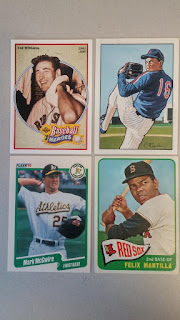 The Williams and Gooden completed two insert sets I was just shy of completing, while the McGwire knocks my 1990 Fleer set down to 5 missing cards.