Trade Recap: This Trade Will Rule!

When I was in high school, the youth group I was in would occasionally hold free card washes as a fund raiser. Yes, I said "free" and "fund raiser" in the same sentence. The caveat was that while the car wash was in fact free, donations were accepted and appreciated. Most people would throw a few bucks our way. Every now and then we'd get someone who would put in a $20 bill. Although I believe that generosity played a big part in these instances, I also felt some people struggled with what to donate as a fair value.

This happens to me personally a lot, especially in situations where it's customary to tip. How much is enough? It's often difficult to assign a value to things, even when we know what we're receiving on our end.

Thorzul Will Rule does a series where he opens some product and allows people to trade him anything. I always thought it was a fun idea, but never participated. This time round the product was 2018 Topps Update. There was one Red Sox card in the lot, which I decided to claim. I also threw my hat in for an autographed card, because why not?

Now came the hard part. What to send him? In the past, people have sent him a variety of things, not always card or even baseball related. I knew I wanted to have some fun with this, and even had some stuff that pertained to his favorite team, the Brewers. You can read about what I sent him here. It was a decent collection of stuff, but even now I wonder if I gave fair value. For his part he seemed to appreciate the return, so I guess I did well.

So what did I get? 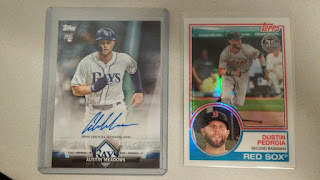 The Pedroia is a refractor parallel that came in a special silver pack from the box he opened. It's a great looking card in hand! Austin Meadows used to be with the Pirates, and I've had a few chances to see him play in Spring Training. That's why I claimed the auto too.

Thanks for the trade Bill!

By the way - he still has a lot of great stuff available, head to his blog and trade him anything!
Posted by Matt at 10:00 AM