Checking Out The Checklist

Topps's latest base set comes out this week, and the list of player has recently been released. Of course, I had to check out what Red Sox would be showing up in my packs. 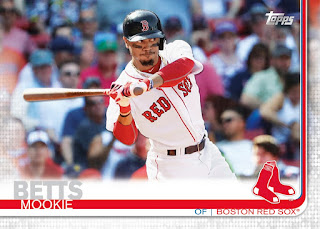 From The Cardboard Connection:

Not a bad lot of cards at all. I'm excited by the World Series Highlights obviously.

I also like to look at the list and see who will already be wearing an outdated uniform. From what I can gather, here's a list of all the Series 1 players who have been traded or became free agents this off season:

35 players! Initially, seeing 10% of a set showing outdated uniforms would seem like poor planning on Topps part, but I'm willing to give them a pass here. A lot of these guys were traded. Among the free agents, Topps wisely avoided the bigger name free agents like Harper and Machado. Also, I usually have no problem with guys that were traded mid season last year getting at least one base card with their last team, even it they only played with them a few months. Those Indians collectors deserve their Josh Donaldson card! Still, that leaves roughly half of these guys who Topps should have waited until Series 2 to include. Not horrible, but could be better.

As far as the set and inserts go, I'll add a few random thoughts: Overall, I'm eager for some new product to come out! I feel like I'll be buying a good amount of this set!