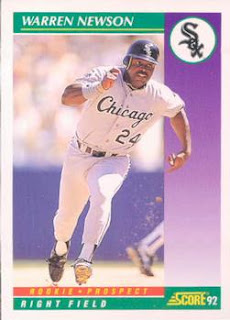 Newson has a rather nice action shot on his 1992 Score card. He spent a impressive 8 years in the big leagues, all in the American League. He played with guys who had longer careers, such as...


I always thought 1992 Score was a great set, and the Dream Team subset is one of the reasons why. This simple shot of "The Big Hurt" looks normal until you realize he's holding an oversized bat.


While Frank Thomas was winding down his Hall of Fame career, Brad Ziegler was just starting to make his mark. Guys who throw sideways always look weird on their cards. That arm is made of rubber!


The Red Sox acquired Ziegler in a mid-season trade in 2016. He signed with Miami after the season and retired last year. 2016 was the year Mookie started breaking out as a superstar, finishing 2nd in the MVP Award race.