The other two are Dennis Eckersley and Derek Lowe.

Thanks to everyone who entered the contest! I hope everyone had as much fun learning the trivia as I did! Before we pick our winner, here's all the clues that were available:

Did anyone find the three hidden clues?

After Clue #2 was posted, I hid this clue on my The Golden Sox Project page: The Cy Young winner he was traded for was once a member of the Boston Red Sox.

After Clue #7 was posted, I put another clue on the Repack Haiku page, giving where the mystery player may have been listed alphabetically. Also, the letters I put an asterisk by were the ones that would be in "Dave Righetti"

The last clue was after Clue #9, and could be found on my profile. It gave a hint towards the year and brand of the card.

Since we have a three way tie, and since I feel bad for leaving just one person out of the fun, I'm going to use Random.org to pick a random number between 1 and 15. Bo gave the first correct answer, so he gets numbers 1-4, one for each point he earned. Fuji gets numbers 5-8, Jafronius gets 9-12, and Michael Ott gets 13-15.

Since Dave Righetti mostly wore #19 during his career, I randomize it 19 times. Whoever has the number wins! Sound fair?

After pressing the Generate button 19 times, we have our winner: 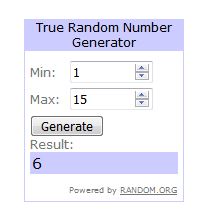