Sometimes You Need To Lose Before You Can Win

Back in March, I wrote a post about the 2003 Boston Red Sox, a team that despite a historic offense failed to even make the World Series. That post was done as an entry for a contest sponsored by Brian at Collecting Cutch. The baseball gods were with me, because although the 2003 Red Sox lost, I won!

I got my prize from Brian last week. Additionally, he sent a few extra cards. Obviously, as the foremost collector of Andrew McCutchen cardboard, he sent along a few of his calling cards as it were: 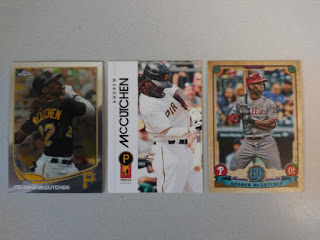 I do believe this is my first card of McCutchen as a Phillie. He still looks weird to me clean shaven (stupid Yankee policy...) 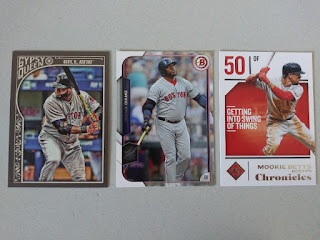 You just can't go wrong with Mookie and Big Papi!

The prize, however...oh that prize! When Brian announced what the contest winner would get, I just knew I had to throw my hat in: 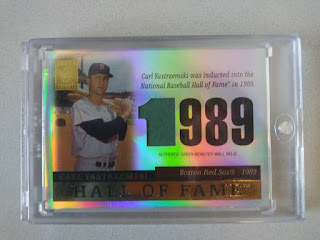 A Carl Yastrzemski card with a relic of Fenway's historic Green Monster? Are you kidding me? This card is far and away the best relic in my collection, and could very well be my new favorite card in my entire collection. I'm still in awe that this card is in my hands!

Thanks for the contest Brian!
Posted by Matt at 10:00 AM