Garrett Richards looked over to the man beside him. "Why did we agree to this?" he asked. Justin Smoak's stare never left the platform in front of him. "We're baseball players, Garrett." Ian Kennedy interjected. "Players get traded all the time."

"Not like this!" Garrett retorted. When he got the call that he had been traded, he expected his next flight would be to a Spring Training site in Florida. Instead, he found himself in Pennsville, NJ, with 3 other players that were not his teammates on the Angels, but were going on this journey with him nonetheless.

"Does anyone have any gum?" Garrett looked behind him at the young face of Julio Urias. He seemed unfazed by this. It was always good when a pitcher didn't get rattled by the unexpected.

A booming voice came over the loudspeaker. "Please step up onto the platform." Almost instinctively, each person did as they were told. Without warning, they were encased in a calming white light, and then they were gone.

Moments later, an alarm rang out. Smoke filled the platform, and what felt like a mild earthquake shook the building. A tall figure cloaked in red emerged from the smoke.

"The Spaceman is back, baby!" The figure howled. Bill Lee looked at the crowd of people beginning to swarm around him. "I hope you don't mind I brought some of my poker buddies with me!"

I received my first batch of cards from TCDB member wackydog. He jumped in early and offered a 4-4 trade for some late 70's cards: 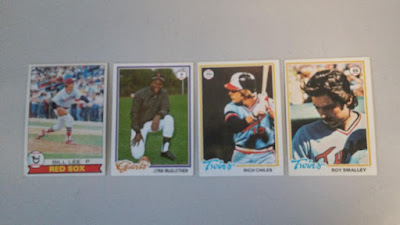 As great as it is to add these awesome cards to my collection, I'm putting them right back out onto the Time Travel Trading block! Any of these cards can be yours, just remember I'm looking primarily to receive and older card in return.

The cards currently available for trade are:

Help me keep the time travels going and make me an offer! The more trades made, the older the cards will get! I'll keep the updates coming as more cards come in!
Posted by Matt at 2:39 PM