As the release date for the new 2018 Topps set approached, I started thinking about what I can do with one of the packs other than simply showing off what I pulled. Last year, I took the first pack I bought and sent every card out for a hopeful TTM autograph request. I got 2 back, which was enough incentive for me to do so again this year. However I also wanted to do something different.

Eventually, I remembered the famous "One Red Paperclip" story - where a man took a single paperclip and initiated a series of trades until he traded for a house!

Shortly thereafter, another person took a 1986 Topps card of Alan Knicely in attempt to trade his way to a 1952 Topps Mickey Mantle.

I've decided to recreate that experiment on a much smaller scale.  I'm not looking for anything nearly as valuable as a '52 Mantle. My goal is to take each card in a pack of 2018 Topps and try to get the oldest possible card I can.  How far back in time can I go?

So here's where you come in. I need trade partners! I'll list the contents from my pack below. Each of these cards is available for trade. Whatever older cards I trade for will also be added to the trade pile and I'll post regular updates on what is available.

A few self imposed guidelines:
Without further ado, here are the contents of the pack: 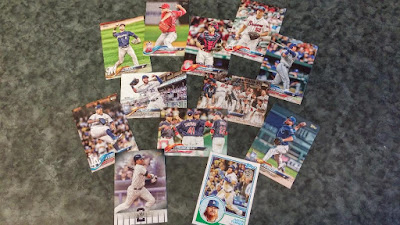 So, here we go! Send me a trade offer, either in the comments below, or through the TCDB. What's the oldest card you'd offer for any of these?