My Wife Is Mad I Brought Dirt Into The House...

Warning: This isn't a baseball card related post. However, it is a post about baseball, and fandom, and free collectable stuff.

I've been following a new blog on the scene called Corner of Ashburn and Yawkey (A Phillies fan in Red Sox Nation). In addition to some great autographs he's acquired, he also  has shown off fan packs he's received - free stuff from sports teams!

I was motivated to email the Boston Red Sox (fanfeedback@redsox.mlb.com) and request a free fan package for myself. Just a little over a week later, I got a envelope from the Red Sox!

Included in my envelop of swag was: 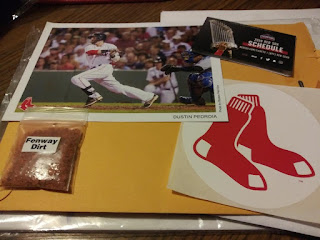 My wife, a Yankees fan, was not nearly as amused as I was. It was an awesome surprise, and after the rough morning I had, it was a welcome bit of joy. (Our pet rabbit fell and dislocated his clavicle - he's alright though, and on the mend. Still, not the best way to start your day!)

My oldest daughter was intrigued enough that she asked if I could get her an Orioles fan pack. (The compromise of a Red Sox fan/Yankee fan marriage - raise the kids neutral!) So I emailed the Orioles and requested two - one for each daughter. I actually got a personalized response back, letting me know they'd be happy to send both girls a fan pack (FYI - She also politely informed me that fan pack requests are usually one per household per year and that I should request fan packs in the future via postcard. Good to know if the girls want one next year!)

Before the week was out, they got their fan packs! They got: 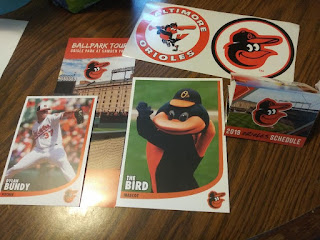 So there you go! Kudos to the Red Sox and Orioles organizations for being so nice! Thank you!

Also, go check out and follow Corner of Ashburn and Yawkey! It's a good blog!