Is Fairfield Running Out Of Junk Wax?

I was coming towards the end of another repack for my weekly haiku series, so it was time to buy another pack. My go-to place has been the Dollar Tree, which usually has 30-card packs repacks available for a buck. I haven't seen these cards there in awhile. I hope they haven't stopped selling them. I was left with no other option but to but one of Fairfield's 100-count (plus a pack!) boxes for a reasonable $5. That should have provided me with enough 80's and 90's goodness to continue my series for a long time. Upon opening the box, I was met with something quite unexpected! There was very little junk wax to be found!

No classic wood-grain borders! No red with paint splatters! No gray with white pinstripes! Where are all the junk wax?

About half of the box was from Topps' 2016 and 2013 base sets! How weird is that? Not that I'm complaining - I didn't get back into collecting until a couple of years ago, so most of these modern cards will be new to my collection. Still, I was expecting the standard fare of late eighties/early nineties overindulgence.

To top it off, a lot of these newer cards were from parallel sets. Among the goodies I got were: 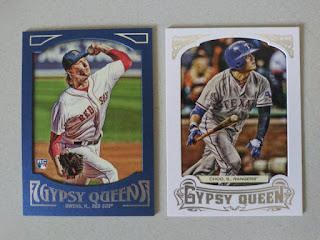 The blue Red Sox card was actually the front card showing on the package. No wonder why I picked this particular box, huh? 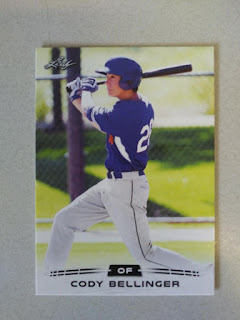 I didn't even know Leaf was still around! 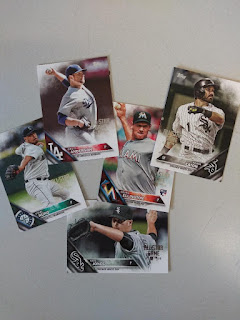 These were exclusive to a boxed set, weren't they?

That's pretty good for a repack I must say! I'm impressed. I'm tempted to go back to see if another box has similar cards.

I'll probably take one or two from each year of the modern stuff to go with the junk wax cards. That'll give me plenty of haiku material to work with!

Has anyone else noticed a decrease in "junk wax" era cards with their repacks?
Posted by Matt at 10:00 AM