It took a month after the set's release, but I finally have my hands on a blaster of this year's Big League set. With this, my First Impressions series has come full circle - the 2018 Topps Big League set was the first one I did! Topps has changed the set a lot since its initial offering - gone are the legends of years past, Players Weekend variations, and the Ballpark Landmarks subset. New are subsets featuring Award Winners and Highlight from the previous year. Although I have no problem with these subsets, I wish they would have found another fun subset to appeal to kids. (That is who this set is still targeted for, right Topps?) Anyway, on to the cards, and my initial thoughts on them. 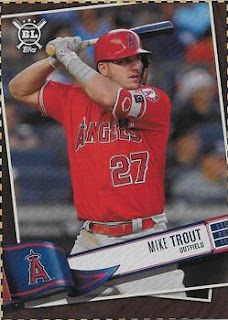 I guess, by virtue of being on the box, this has the honor of being the first card. Although the border is a different shade from the base set, I can still talk about the set design here. Overall, I like the concept of the design - the pictures scattered on a table/desk motif. I've always loved the wood grain look on baseball cards, and here it is used subtly and is very well-done. The team flags are fantastic, too. My main quibbles are with the name banner and the execution of the scattered photos. I don't mind that Topps used a tilted frame to showcase the photos, but the fact that the photos themselves aren't tilted along with the frame annoys my undiagnosed OCD tendencies. The name plate is also skewered at a different angle than the frame, which makes it look even more off. 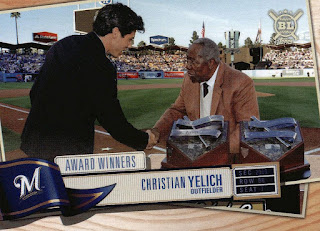 Now this is an amazing card! A beautiful shot of Yelich receiving his Hank Aaron award from none other than the legend himself! I would love to see more cards of current players interacting with players of the past. The J.D. Martinez counterpart is officially a wanted card now... 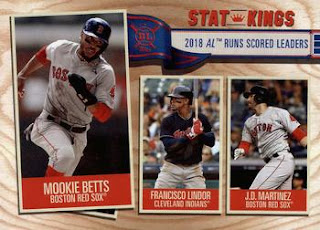 The hot streak continues! This is the 3rd straight set I've done a First Impressions on that has given me a Mookie Betts card. I guess winning an MVP for the World Champs makes a player stand out! 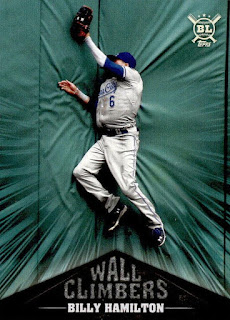 Here's one of the inserts from the set, Wall Climbers. I think they could have done better with this card. Besides the poor angle that makes it look like he's laying on a tarp, Topps makes the unfortunate decision to celebrate a play that Hamilton made last year as a Cincinati Red and then change his uniform to his current team. It's one thing to Photoshop a new uni on a generic base card, but when you're specifically highlighting a particular game/play/achievement, then stick with historical accuracy. 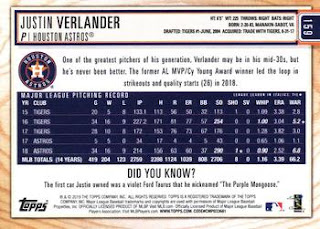 Here's what the back of the cards look like. It's pretty much the same as last year, although the white makes the extra unused space stick out more. The Did You Know? section returns again, to my personal delight. Verlander gets my vote for best trivia fact of the blaster. 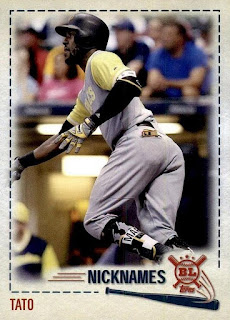 Big Leagues does the Players Weekend nickname cards again, only this year they are a separate insert set. The great thing about this particular set is the back actually explains the meaning behind nickname! I now know why Marte had "Tato" on his back - that's important information people! 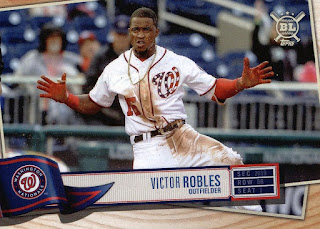 Big Leagues has some great action shots, including this one. Victor looks like he's showing us his "jazz hands!" 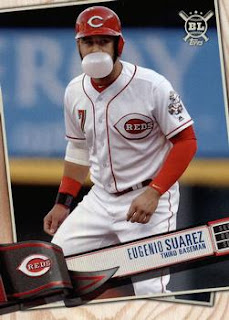 Kurt Bevacqua would be proud! 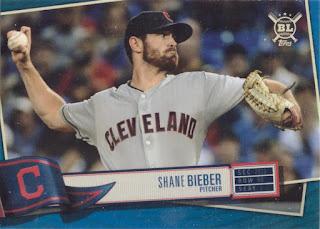 Each blaster box comes with a pack of 5 blue bordered parallels. Each pack seems to contain a gold/yellow parallel also. As with color parallels, they seem to look better depending on the team represented.

All in all, not a bad follow up to the premiere release. There's no sophomore slump here!
Posted by Matt at 10:00 AM