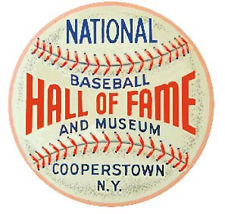 Next Sunday, the Hall of Fame will induct (for the second straight year) an amazing 6 new members into its hallowed halls. In honor of this event, I'm going to do a daily series this week showing off my 5 favorite cards in my collection for each player.

We'll start the series with a player that many people don't think deserves the honor, Harold Baines. Personally, I have no issue with his induction. I remember him for his consistency and ability to get the big hit. In my youth, I would have probably bet that he'd make the Hall, not because of any real stretch of dominance, but because I was certain he'd compile stats and reach some lofty numbers. I'm presenting these in chronological order. 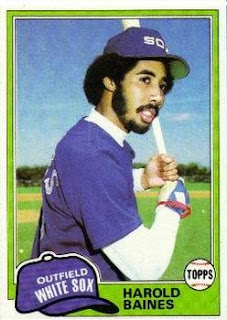 Along with his 1981 Fleer card, I can now say I have two more Hall of Famers' rookie cards in my collection. The 1981 Topps set is one of my favorites, and I'm pleased that the two premiere rookies from that set (Tim Raines being the other) are now enshrined. 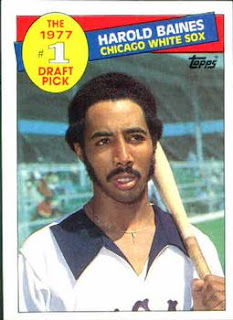 This card gets in solely because of those beautiful wide shirt collars the White Sox wore in the 70's! Baines becomes the 3rd #1 Draft Pick to be elected (joining Ken Griffey Jr and Chipper Jones). 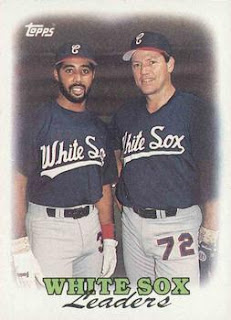 This card went from being a good card to an awesome multi-Hall of Famer card just like that! Ironically, neither of these guys were listed among the White Sox's 1987 team leaders. 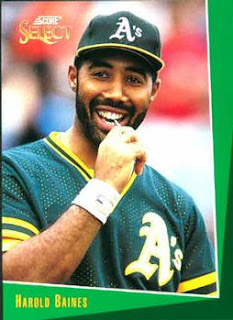 Who doesn't love shots of ballplayers with big smiles on their faces! I much prefer this over the stoic professional glare he often had in the batter's box. 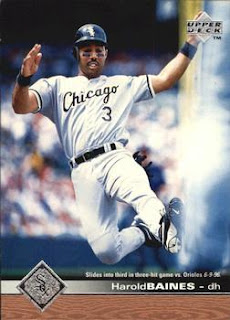 The clear winner of the best Baines photo in my collection. This is such a cool angle shot of him sliding into third base!

Congratulations Harold Baines!  Welcome to the Hall!
Posted by Matt at 10:00 AM