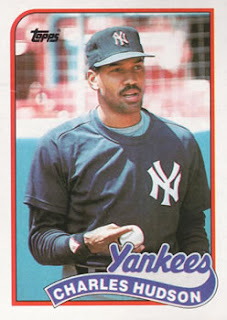 Hudson was a pitcher in the Major Leagues from 1983 to 1989. His career pretty much ended in August 1989 after he drove intoxicated into a telephone pole and had to have reconstructive knee surgery. The most interesting thing about this card is it shows him holding the ball in a split-finger fastball grip.


Hudson didn't play for the Yankees for very long, but long enough to play with the immortal Rickey Henderson.


Rickey's last stop was with the Dodgers in 2003. Even then I bet he could still out-run a fresh legged young David Ross.


Ross of course went on to being a key member of Boston's 2013 World Series title run. Mookie would make his debut the following year.