This was by far the most unusual trade I've ever made. Last April, a TCDB member named Jeff messaged me about a 2005 Fleer Tradition parallel I had in my collection.  A fellow Red Sox fan, Jeff needed it to complete the team set, and was willing to trade a David Price autograph in return. Sounded more than fair to me, only one little problem. I could find the card he wanted anywhere! I thought I had a pretty good idea of which box I had it in, but it disappeared. I obviously didn't want to agree to the trade until I could put my hand on the card, so I told him I'd keep looking and message him once I had it. Weeks passed, then months. Jeff would occasionally touch base with me and see if I'd have any luck, but the card had vanished without a trace.

Fast forward to October. As I was putting cards away, guess which card decided to once again reveal itself? You got it! I pulled the card for safekeeping and message Jeff to see if he was still interested. He was, and we set up the previously discussed trade. I sent out his card. He sent out mine. He received his card. I....waited.

After almost two weeks, Jeff messaged me. He noticed I hadn't marked the transaction as received yet, and wanted to see if it had arrived. I told him it hadn't and that I'd wait another week. I know funny things happen with mail deliveries sometimes, and I didn't think anything suspicious was going on. Three weeks after the card was mailed out, and still nothing. Jeff offered up two replacement autographs, which I thought was quite generous.

I got those cards within a few days: 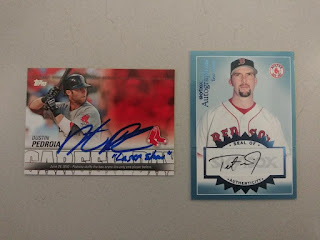 The Pedroia is an IP auto, and I absolutely love that it was signed "Laser Show" (One of the best nicknames in sports, IMHO). The Trot Nixon looks really sharp too.

As of this publishing, David Price still hasn't shown up either here or been rerouted back to Jeff. I told him I'd send it back if it ever came, and he generously said I could keep it.  I just hope it shows up somewhere. It'd be ironic if it took as long to arrive as it did for me to find Jeff's card. That would be a fitting bookend to this unusual trade.

Thanks again for the cards, Jeff!